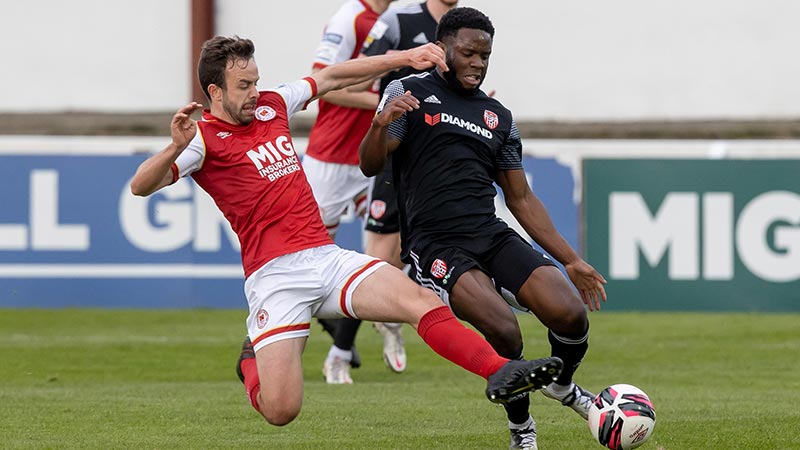 St. Pat’s solid start of the season has continued with an impressive 2-nil win over Derry City in the opening Series 4 tie in the Premier Division.

This victory was built in the second half by goals from Robbie Benson and Darragh Burns and with City already reduced to 10-men after Koy Lupano was dismissed in the 33rd minute, the Saints stayed top of the league with 10-points.

The Candystripes, started the game at Richmond Park ambitiously and set the early pace coming close to Jaros goal.

Although Stephen O’Donnell’s boys managed to fight back and take the reins shortly after, Lupano’s second yellow card proved to be a punch in the stomach too strong to hold.

This forced the visitors to play inside 15 yards most of the time, leaving disappointed once more, as they headed back up North still looking for their first points.

Most of the play came inside the visitor’s half, and while Jaros suffered a couple of chills inside the first quarter of an hour it wasn’t enough to get his kit dirty.

The hosts came forward with Chris Forrester looking frequently for his teammates on the sides in Matty Smith and Robbie Benson; as Jamie Lennon held the counterattacks together with the back four.

Pat’s were much more aggressive in the second 45 minutes with Matty Smith, Ronan Coughlan and Billy King constantly imposing themselves inside the Candystripes box as the midfielders were looking for more moves in the middle; comfortable in possession and looking dismantle the opponent's plans.

Passing the hour mark the Red and White Army were broken. Ronan Coughlan’s first effort came up to Robbie Benson’s left-foot as he managed to change the score with a first-touch finish inside the 6-yard box.

At this stage Pat's were creating enough chances to put it past the goalkeeper, however, Derry City’s tremendous defensive efforts deserved a less cruel ending.

Just five minutes after replacing Matty Smith, a through ball from Chris Forrester met Burns on the right as he came into the box drizzling Cameron McJannett with a dummy settling it in with a cool finish facing the goalkeeper, Nathan Gartside.

Days of joy for Pat's now waiting to see if Sligo Rovers and Finn Harps keep running at their side on the top spots of the Premier Division league table.