Derry cruise to win over Pat’s 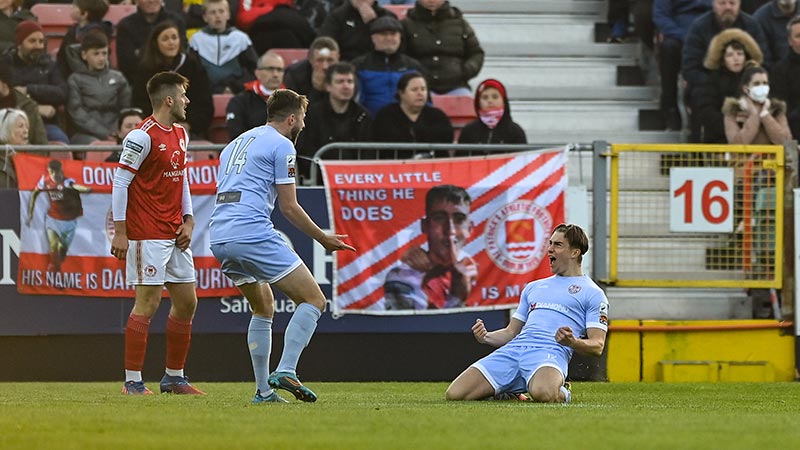 Derry City cruised to a 4-0 thrashing away to St. Patrick’s Athletic at Richmond Park this evening.

A brace from Jamie McGonigle either side of a Matty Smith opener and Cameron Dunnigan rounded off a great win for the league leaders.

City took the lead after just three minutes when they pounced on the hosts trying to play it out from the back.

Forrester’s poor pass was intercepted and worked to the edge of the area where Brandon Kavanagh slipped through Smith who controlled it with his left and stabbed it past Anang with his right.

It should have went from bad to worse for the hosts. Adam O’Reilly got caught on the ball in his own area following a corner kick, he tried to switch the play but hit the ball off Grivosti’s back which dropped to McGonigle who swivelled and rifled it in, before he was deemed to be offside.

It was a dubious decision to say the least as the ball came off a Pat’s player last before being stuck into the net.

McGonigle got his goal however, on the half hour mark when Will Patching collected the ball on the edge of the Saints area and played it out to Smith who fired the ball across the face of goal to the oncoming McGonigle who tapped it in for his first of the evening.

McGonigle would soon get his second, ten minutes later, when another slack pass from Forrester was collected by Kavanagh who played a lovely reverse pass in front of the Derry number nine who ran with the ball and struck it into the far corner.

Derry added a fourth when another slack pass from Joe Redmond this time was gathered by Smith who ran inside and slipped it to Patching who opted not to shoot, but, instead set it back to Cameron Dunnigan who curled the ball beautifully in off the post from 25 yards out.

The away side cruised the rest of the game with the home side not creating anything after the goal. For St. Pat’s, it was a damaging defeat and performance. They failed to create anything clear cut throughout the game and were abysmal for large parts of the game.

That being said, Derry produced a great away performance, and they now march on to Bohemians at home next Friday night. St. Pat’s have to pick themselves up again when they travel for a big game away to Drogheda United.