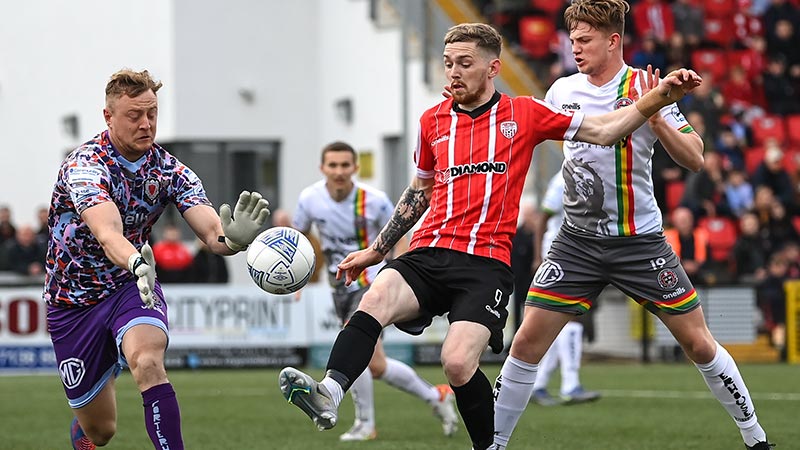 Half an hour in, Patrick McEleny won Derry a penalty, converted by Will Patching.

Despite plenty of endeavour from both sides in the second half, neither seriously looked like scoring and clear-cut chances were at a minimum as it finished 1-1.

Although being the league leaders, Derry was relieved to make it to half time level. Bohemians had proved more than a match and were increasingly threatening through their front three of Junior Ogedi-Uzokwe, Promise Omochere and Liam Burt.

After a quarter of an hour, the latter two combined, Burt coolly playing in Omochere who finished with ease. The goal was just rewards for an opening which Bohs had dominated, frequently probing in forward positions via Ali Coote’s wickedly reliable set pieces.

By contrast, the hosts, free scoring of late (11 goals in their last two games) struggled to build any rhythm. But when McEleney was pushed by Conor Levingston, in the eyes of some a soft foul, Derry had a gift. Patching stepped up to score, levelling matters which is how it stayed until the interval.

The second half was cagey, Derry slightly on top but also unable to break Bohemians down. This was evidenced by their clearest chances being a long-distance hopeful punt by McEleny and a Patching free kick that ruffled the side netting. Bohemians had a half chance for Junior at the death but his header dropped wide.

Bohs counter-attacking danger was rapidly diminished too although their manager Keith Long will undoubtedly be the happier with both a resilient performance and satisfying result.