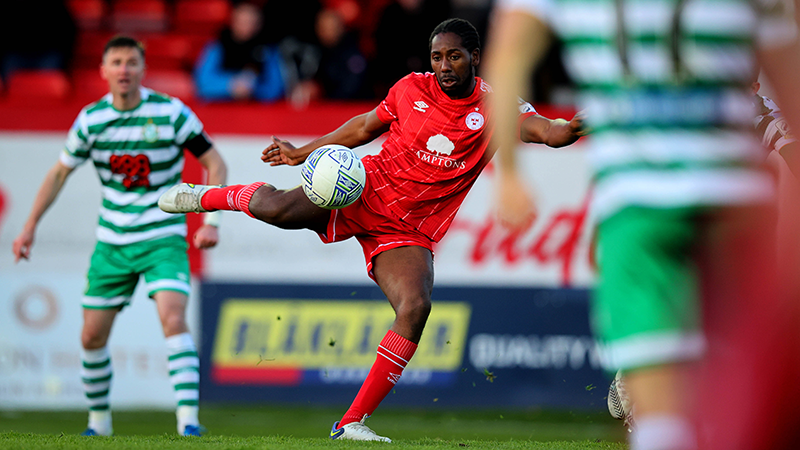 Aaron Greene proved to be the super-sub for Stephen Bradley as Shamrock Rovers left it late to beat Shelbourne 2-1 at Tolka Park tonight.

His 89th minute strike prevented what looked like a huge point for Shels after Shane Farrell had equalised for them in the fist half.

Rovers dominated most of the game and got off to a perfect start when Andy Lyons scored after just two minutes.

The Reds were completely dominated in the opening 45 minutes and provided no real threat to the defending champions. Stephen Bradley’s men pressed intensely not allowing Shels a moment on the ball.

They would come close to doubling their lead with Graham Burke firing wide and Jack Byrne being denied by a great save by Brendan Clarke. Fortunately for the hosts the score line was only 1-0 at the break.

It was much the same after the restart as the ball was mainly in the Shels half. Despite this, the game’s next goal was scored by Damien Duff’s men.

Kameron Ledwidge picked out Shane Farrell at the back post who smashed home his cross from close range.

The Shelbourne players and fans rose to the occasion after Farrell’s equaliser and Tolka Park was in fine voice as confidence grew.

Still it was Rovers who came closest to finding a winner. Rory Gaffney had an effort saved by Brendan Clarke.

A point shared seemed like it was on the cards until the 89th minute when two Rovers subs combined.

Danny Mandriou pulled the ball to the edge of the area finding Aaron Greene who rifled home the winner to give The Hoops all three points.

Shelbourne are still to win at home this season and they will have to wait for their next attempt as they travel to face Derry next week.

As for Rovers, they host St. Pats at Tallaght Stadium.