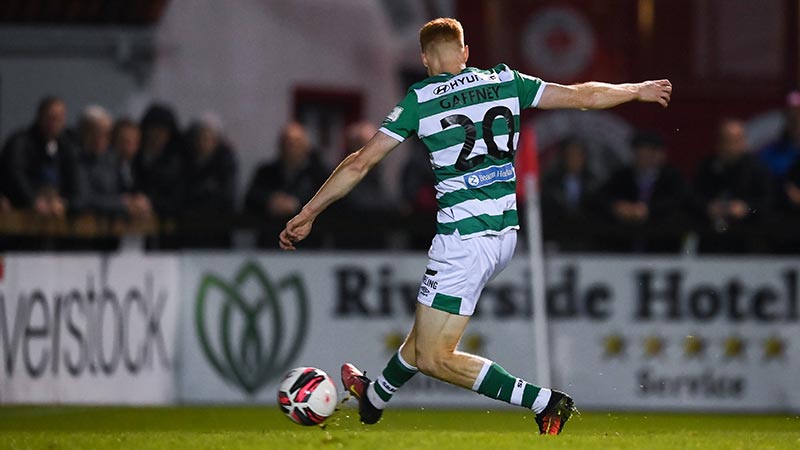 Sligo Rovers ceded all three points to rivals Shamrock Rovers tonight at the Showgrounds, with Rory Gaffney’s goal enough to secure them the 1-0 triumph.

Effectively gutting The Bit O’Red second surge in the title race, the showcase from Stephen Bradley’s team asserts their ascendancy at the top of the SSE Airtricity League Premier Division.

Sligo will have been disappointed not to have pulsed more into the match after the 24th minute game changer but despite glimmers of promise their lack of creativity up front is to blame for the setback.

Before the kick-off this one promised to be a cracker with both sets of fans ensuring an electric atmosphere played host in the West.

The opening exchanges reflected that tense nature, Shamrock Rovers finding their feet up front with efforts from Barry Cotter, Gaffney and Ronan Finn while the same could be said for the The Bit O’Red attempting to push forward through Walter Figueira and Andre Wright.

As sure as rain is wet Greg Bolger managed to pick up a yellow card just before his ex-outfit secured the opener. Gaffney made good on his early bright sparks to slot the ball through Ed McGinty’s legs and into the back of the net.

This strike gave the visitors the confidence they needed to push on, simultaneously sending Sligo on the back foot with their tenacity. Forcing McGinty into a few tough saves, the score-line remained the same at the interval thanks to John Mahon and Co.

The start of the second half saw the same story with Hoops excelling in the driving seat, but as time went on tensions rose, cards were issued to Finn, Richie Towell, Roberto Lopes and Daniel Mandriou while Sligo picked away for an equaliser.

Opportunities from Melvyn Lorenzen and Figueira all came close, but even with the five minutes added time the absence of young John Kenny was evident as that moment never came for the home squad.

This was big win for Shamrock Rovers, as the result sees them six points clear of St Patrick’s Athletic and in poll position coming into the back end of the season.