Fortunes split as St Pats and Dundalk draw in Dublin 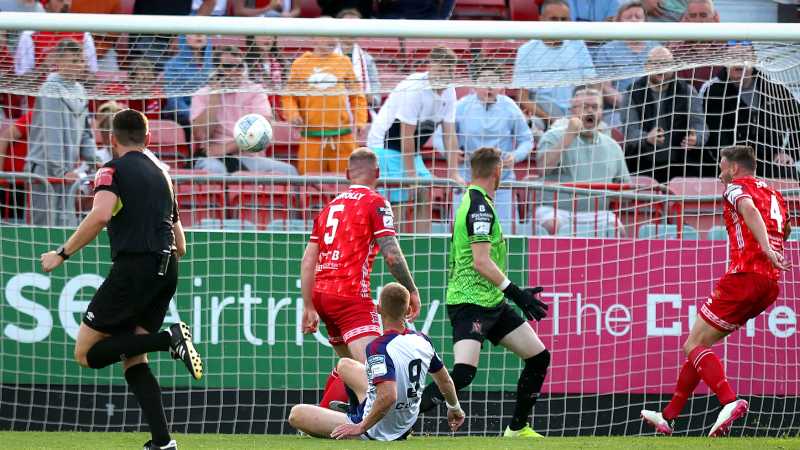 Deflections were the name of this game. Both Saint Patricks Athletic and Dundalk were fortunate to score goals thanks to efforts that required assistance to get past their respective goalkeepers as Eoin Doyle and Daniel Kelly each scored goals on each side of the half to tie the game at 1-1 in Richmond Park, despite the fact that both teams will believe they should have won it outright.

The Saints' Joe Redmond had the first opportunity, but his header at the back post was weak, and it went straight into the hands of Nathan Sheppard's replacement for Dundalk, Peter Cherrie. They didn't have to wait long to take the lead because Eoin Doyle's next effort took the cruelest of deflections from Andy Boyle and went into the top of the net.

Following the concession, Dundalk pressed high, and Patrick Hoban and Lewis Macari linked to set up Robbie Benson, who sent a shot from the area's edge that just tipped over the bar. On the edge of the box, Keith Ward snatched the ball from Redmond, but his snap shot missed because he was unbalanced. Doyle saw Cherrie straying from his line and fired a long shot over the goalkeeper, but it went past the crossbar.

The second half changed from being calm to frantic. Cherrie is able to respond to a well-placed attack from Forrester. But the first significant call came when Serge Atakayi outran Andy Boyle in the area and the two collided, both players going down, but the referee still allowed play to continue. With his breakaway run, Tunde almost added a second goal for the Saints, but Cherrie saved it with the lightest of touches by deflecting it against the post.

For the final fifteen minutes, the game was played at a frantic speed as Dundalk threw all they had at the home team. Daniel Kelly had a chance to win the match for the away team when a Leahy cross found the winger at the back post, but his header missed the target.

Honours even but Dundalk’s management of Stephen O’Donnell and Padge Cregg were both sent off near the match conclusion.