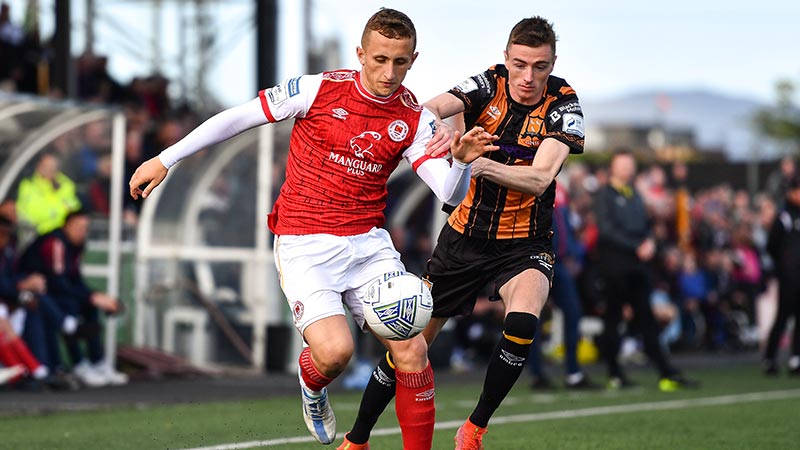 Dundalk secured the crucial three points and moved into second position in the league thanks to a solitary Daniel Kelly goal that proved to be the difference in a tense night at Oriel Park.

In a game that was played at times at a frantic tempo, there was little or no give between the teams, but Kelly's broke the tie, but it was Nathan Sheppard's outstanding performance in goal that will be remembered.

The first sight of goal came when Joe Adams battled multiple times to maintain the ball on the edge of the area for the home side, but his final effort lacked power and was comfortably saved by Anang. The visitors then attempted to break the Dundalk defence with a glancing header from Eoin Doyle on the edge of the area, but it was easily held by Sheppard.

Dundalk was to take the lead with their next opportunity, which came at a bad time for the Saints' defence as Daniel Kelly beat the offside trap. It appeared as if the threat was about to be snuffed, but Sam Curtis' header pulled his own player out of the equation, and Kelly took up the ball to round Anang and put in his fifth goal of the season.

The away side had the first chance of the second half, with Chris Forrester hitting a low volley from the edge of the area that went inches wide.

After that, the home side had two chances in quick succession, with Greg Sloggett hitting a superb effort from outside the box that was superbly saved by Anang, and a recycled ball falling to Robbie Benson, who fired it from distance but it didn't drop at the correct time.

Nathan Sheppard's recent performances have been lauded, as he has been in command of his area throughout the game as the Saints attempted to play a more expansive game in the second half.

As the Welsh Under 21 international ensured that his goalline was not breached, he made a series of match-winning saves. The best save came from Eoin Doyle's lower header, which the Dundalk goalkeeper clawed off the line to preserve the three points and the clean sheet.

Derry City's persistent stumbles following their Tallaght defeat have been an unexpected twist in this league season's tale, but Dundalk FC going into the break second with a six-point cushion illustrates exactly what Stephen O'Donnell and Dundalk FC are developing. The word "phoenix" comes to mind when you think of this revival.