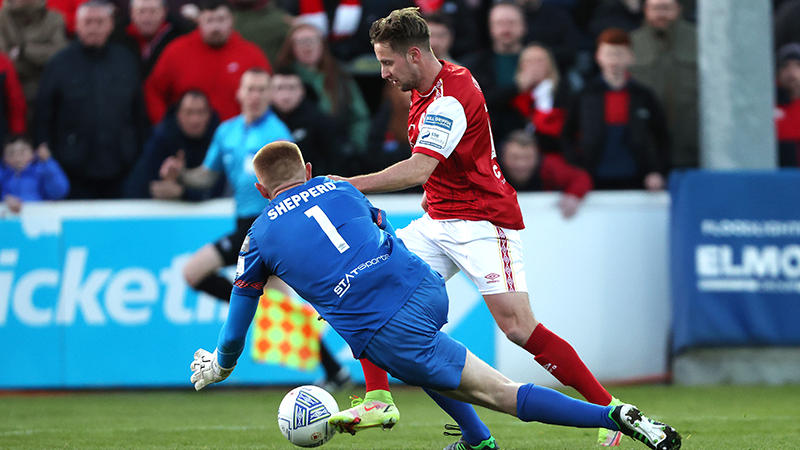 St. Patrick’s Athletic and Dundalk F.C played out a frustrating scoreless draw at Richmond Park this evening. Neither side could find the killer pass all game and both sets of fans will be unhappy with a 0-0 score-line.

Both sides had their periods of dominance but were unable to create too many clear cut chances. Darragh Burns looked the biggest threat all game and an Eoin Doyle header that was acrobatically tipped over by Dundalk keeper, Nathan Sheppard was the best chance of the game.

Despite dominating most of the first half with plenty of possession, helped by the tricky dribbling and turns of pace by wide men Billy King and Darragh Burns, St. Pat’s had nothing to show for their strong start.

Dundalk took a long time to get up to speed, they struggled to win the 50-50 balls were dangerously exposed on the flanks. As the half progressed, however, they began to stamp their authority on the game. Driven on by Robbie Benson in midfield who had the best chance of the first half when Patrick Hoban drove at the byline and picked out Benson well on the edge of the penalty area. His effort was ultimately blocked effectively by James Abankwah and this was the only real bit of space found by either team around the opposition goal.

After the restart, the game continued in the same vein. It wasn’t until the 62nd minute that the Saints were able to give Eoin Doyle the service he needed when a Darragh Burns cross found the head of the experienced striker. Robbie Benson made an important clearance minutes later when a Jason McClelland corner found the head of defender Tom Grivosti.

The best chance of the game was to come in the 83rd minute when again, a fine Darragh Burns cross off his left boot found the head of Eoin Doyle. The striker directed his diving header straight at Nathan Sheppard who again managed to lift the ball above the crossbar. An excellent save from the young goalkeeper but Doyle will rue the missed chance.

The game opened up in the last few minutes as both teams searched for a winner. However, as the tempo increased, so too did the fouls and neither side could build up too much-attacking momentum.

The Saints will be disappointed to come away without a win tonight and despite being the better side, they did not create enough clear cut chances to get all three points. Next up for St. Pats is a tough away fixture at Shamrock Rovers while the Lilywhites host Sligo Rovers.