Billy is King in Saints Win 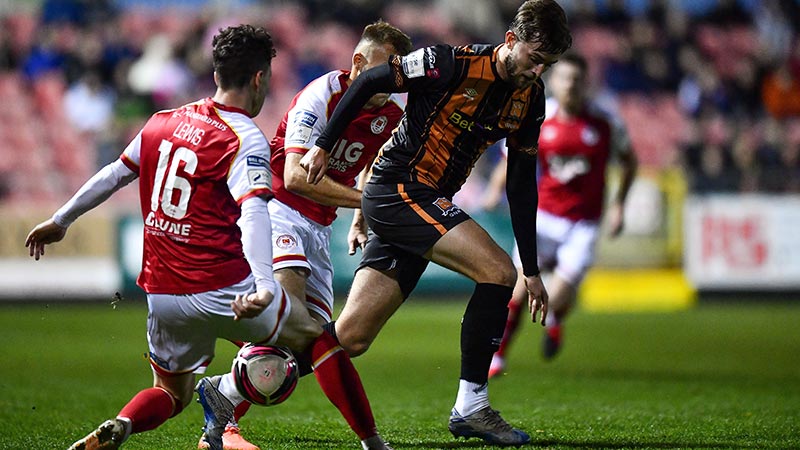 Billy King’s first-half goal was the all-important difference for St. Patricks Athletic as they kept the champagne on the ice at Tallaght for just that little while longer.

The result has also put Dundalk right back into the relegation dog-fight, as the Lilywhites left Richmond Park empty-handed once again for the second time in three days. King’s goal was excellent in its execution but Dundalk had chances of their own that went begging at every frustrating turn.

Both sides had early chances to take the lead with Jamie Lennon’s curling effort going high over the bar and Daniel Kelly’s chip to David McMillan just evading the Dundalk strikers advances. Will Patching almost gave the Lilywhites the lead courtesy of a curling free-kick that Vitezslav Jaros had to be smart to tip it over the bar, from the resulting corner Sam Stanton had his effort cleared off the line after the ball fell to him kindly at the back post.

The Saints took the lead some sixty seconds after it looked as if they were certain to fall behind. Darragh Leahy’s diving header was excellently stopped by Jaros and from the resulting attacking play Billy King cut inside from the right and hit a fantastic left-footed effort that left Peter Cherrie rooted to his goal-line helpless to stop it.

After a sustained and continued pressure from the home side, it looked as if the Oriel Park outfit were back on level terms as Will Patching’s shot was in the back of the net virtue of a slight deflection, that touch was from Greg Sloggett who had strayed into an offside position saw the goal ruled out.

Both sides had early chances to add to the scoresheet in the second half as Robbie Benson looked to further compound misery on his former employers saw Andy Boyle put his body on the line to block the effort.

Dundalk's best chance of an equaliser came from a fantastic counterattack as Michael Duffy broke down the left and his low cross met Daniel Kelly but it was just behind the winger and his effort went over the bar.

Darragh Leahy had a chance at the death to steal a point for his side as Duffy once again the provider of the chance saw the defender unmarked right on the penalty spot but his header was weak with Jaros saving well.

This result tonight and in Dalymount Park now means this Friday's match between Dundalk and Waterford does not even come close to being regarded as a 'six-pointer'.

It's the next chapter of this seasons survival series in the Premier Division.