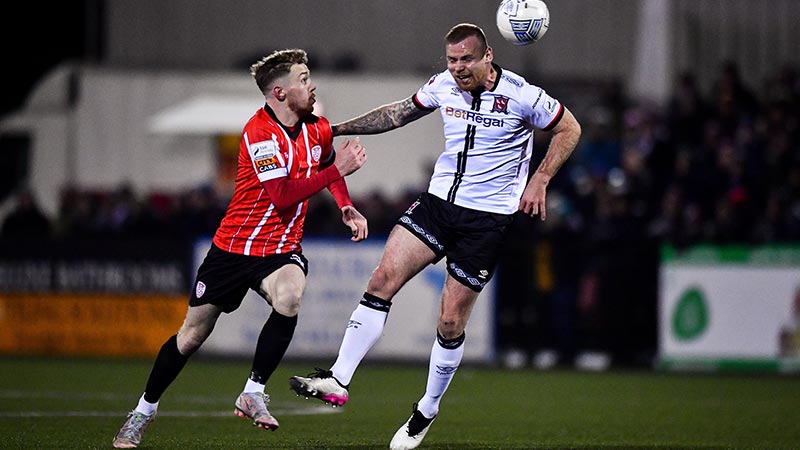 Dundalk and Derry served up an opening game to remember as the men from Foyleside came back twice from behind to secure a draw in a fiery game in Oriel Park.

Dundalk took the lead twice by debutants Stephen Bradley and Mark Connolly only for Joe Thompson and Jamie McGonigle to find the net for the away side to secure a point.

Both sides had early sights on the goal with both keepers while tested showing composure to clear the present danger. This was by all accounts a more frantic opening game of the season than most. The game was simmering and then burst into life when Sam Bone forced Brian Maher into an excellent low save to tip the ball around his near post.

The match fuse was well and truly lit when a melee broke out between both sides following an attempted overhead kick by Steven Bradley which saw Derry’s Danny Lafferty have his arms raised immediately to his face and went down under contact with both sides incensed by the incident. The result was four players cautioned some more bewildered than others.

The home fans were on their feet not long after as the Lilywhites took the lead, debutante Stephen Bradley cuts inside onto his left down as he bore down on the right-wing as his low effort flew past Maher to open Dundalk’s league account.

Bone was once again on hand to try his luck from range, the fans thought it had hit the back of the net but the side netting was to deny the Lilywhite defender a debut goal. Derry was to draw level at the end of the half as a cross from the right by Jamie McGonigle was met at the back post by the unmarked Joe Thompson who sent it flying into the back of the net with Paul Doyle trying to get back in vain.

The second half started a lot calmer than its former as the home side grew in stature as the game progressed. Patrick Hoban looked as if he has taken his side back into the lead but for the post to deny him. Dundalk was to regain the lead with Robbie Benson's pinpoint corner meeting Mark Connolly. The towering header by the Clones native flew past Maher to restore the Lilywhites lead, but the celebrations were short-lived.

James Akintunde with Derry's next attack skipped down the left with ease and squared it for the onrushing McGonigle who headed the ball home diving low at the near post.

Neither side could muster up a crescendo worthy of the contest to seal the win with Jamie McGonigle striking the post late on. Dundalk will feel a defensive lapse cost them this contest, Derry will have questions of their own to answer.