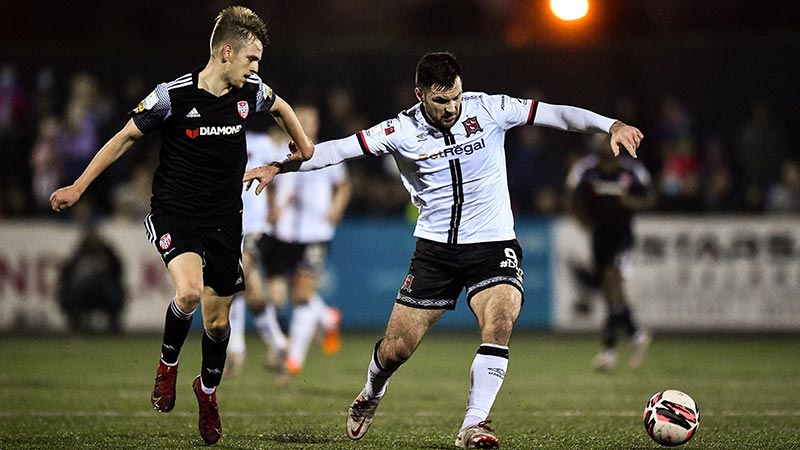 Derry City clinched three points and by virtue of results elsewhere has meant they leapfrogged into the coveted fourth place in the final league standings, as they defeated Dundalk at Oriel Park.

Ciaron Harkin and Jamie McGonigle scored minutes apart on each side of the break to secure their first win in North Louth since 2013.

Dundalk started the game in earnest as both sides had chances to put the game in their favour. A fantastic break down the right saw Raivis Jurkovskis cross into the area that initially met Patrick Hoban, his thundering effort cannoned off the defender with the second ball falling to Sean Murray, whose effort went over the bar.

The Candystripes responded in kind as Joe Thompsons free-kick whipped towards the Dundalk goal at pace saw the low effort cleared by Cameron Dummigan.

Dundalk had another sight on goal with Patrick Hoban breaking free of the Derry defence, just as he was about to pull the trigger he succumbed to a heavy challenge. Hoban was once again the mastermind for another Lilywhite attack as he laid the ball to Darragh Leahy with David McMillan going just wide.

Dundalk did open with a goal of real class just after the half-hour mark as Sean Murray broke from the right into the middle of the Derry half and unleashed an unstoppable effort past Gartside. If the Dundalk goal was good, City's equaliser was even better.

Right on the stroke of 45 minutes, Ciaron Harkin hit a speculative effort from 40 yards that left the Dundalk defence flat-footed, taking the slightest of deflections that misstepped Cherrie the ball snuck past the Dundalk keeper at his near post.

Derry took an early lead after the interval courtesy of Jamie McGonigle. He collected the ball on the edge of the area evading Leahy to hit a low curling effort past Cherrie.

The North Louth men thought they had it back on level terms as Sam Stanton's cross was met by McMillan with his shot blocked and the ball falling to the feet of Sean Murray.

The crowd were already cheering only for a last-second clearance off the line.

Dundalk continued to press forward for a leveller late on with Sean Murray and Daniel Cleary going close but they both failed to make Gartside work as Derry's defence held firm.

The Lilywhites notorious for grabbing late goals couldn't muster one in this contest as, despite opportunities, they couldn't make them count as Patrick Hoban's diving header flashed just wide at full time.

With a season starting with an Italian coach from Apecchio that had much change and turmoil, it ended tonight with a man from Tallaght coming to save Dundalk’s season. A new dawn is upon the club, its fans are now full of hope and expectation.

But for Michael Duffy and Patrick McEleney with others in the squad, it could be like Filippo Giovagnoli before them: "Tempo di salutarsi"