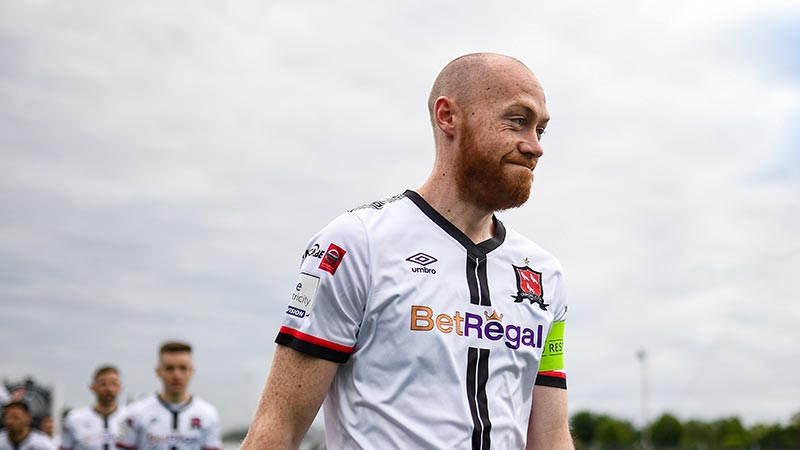 Dundalk sent Chris Shields off into the sunset with his final three points in a Dundalk shirt as the hosts overcame Derry City and leapfrogged them in the table with a win in Oriel Park tonight.

That's seven points from a potential nine since Vinny Perth returned to the club. This win gives a much-needed boost to Dundalk’s slight aspirations for Europe. For Derry City, it’s a dent in the improvements they have made of late.

The home side took it directly to the Candystripes and at one stage it looked like it was going to be a battle between Nathan Gartside in the City goal and Dundalk striker Patrick Hoban. The Dundalk hitman did everything right on three occasions only for the Derry keeper to deny him at every turn.

It was Daniel Kelly who got Dundalk off the mark, as Michael Duffy hit a low effort that Gartside could only parry and Kelly was on hand to convert the rebound. Both sides had chances to score but Gartside and Abibi were both called into action and both pulled off fine saves.

The second half burst into life as Dundalk were awarded a penalty following a handball in the area by Cole and the referee pointed to the spot. Hoban sent the ball to the right and scored despite Gartside’s best attempts to save it. Derry went straight on the offensive and following a series of attacking Eoin Toal headed powerfully past Abibi from a corner to pull the game back to a one-goal game.

It was the home side had the better of the chances to extend their lead with both Patrick Hoban and a brace of chances from Michael Duffy were all well saved by Gartside bit Abibi was called into action to collect a high ball from an initial shot from Eoin Toal that could have caused issues.

Despite a late rally for a leveller which saw Dundalk play deep in order to maintain their lead, Derry City could not get the coveted equaliser they craved. A draw would have been regarded as a fair result as nothing really separated the sides but the win ensures Dundalk's steady steps to better things begins to take shape under Perth.

Shields hands the baton to his teammates to finish the job, after making 347 appearances for the club in a trophy-laden ten seasons at the club.