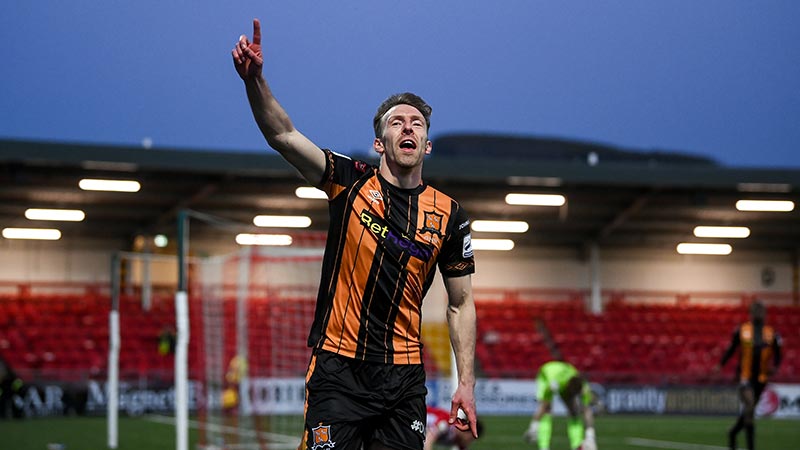 A win still eludes Derry and Dundalk as the sides shared the points in a tough and tight contest in the Brandywell.

It looked as if Dundalk’s strength and depth would come to the fore with a goal from David McMillan.

Cameron McJannett snatched a point for Derry as he capitalised on Alessio Abibi’s hesitant moment in the Dundalk goal.

Despite Dundalk putting massive pressure on the hosts towards the end of the match, Derry’s defence and high tempo gave the just rewards for a point.

The opening exchanges saw an eager Dundalk, as Sam Stanton sent in a clever cross from the left and Hoban's near-post header just flashed wide.

Dundalk continued to pressure the Derry defence, and an excellent ball sent in by Patrick McEleney saw Junior head towards goal but it went over the bar.

The best chance of the half for Dundalk came when Michael Duffy sent in an excellent cross to McEleney, who chested it down and he struck a shot with the outside of his boot, but it flashed wide of the post.

Derry responded when they had a good effort from a set-piece, as Lafferty's free-kick was sent into the area and Akintunde rose highest to head just over the bar.

34 minutes in and the visitors were forced to make a change, with David McMillan replacing Hoban, and Derry nearly went ahead as Dundalk were not switched on from the sub and Will Fitzgerald broke free of Andy Boyle and his low shot was saved by Abibi.

Dundalk upped the tempo in the second half and they got their just rewards as A fantastic breakaway ball that began with Abibi saw McEleney feed the ball to Michael Duffy and cross was met by McMillan at the near post and he smashed it past the keeper.

Derry were forced to defend deep as Dundalk continued to press as a fantastic through ball set Stanton free and his effort forced Gartside to save smartly.

Dundalk went close to adding a second with an almost carbon copy of the first goal attempt as McMillan nearly scored again as Duffy's low cross is met by the striker but he lost his footing at the last second.

Derry equalised as a free-kick was sent into the area, and Abibi spilt the ball that was headed goalwards and he tried to clear it from the area and Cameron McJannett pounced to put it past the keeper from close range.

Dundalk had a great chance to go back into the lead as McMillan struck an effort on the volley but it went wide. Derry dropped deep into their area and Dundalk tried to apply a grandstand finish with a series of chances.

Michael Duffy’s first shot on the edge of the area had it blocked down, McMillan once again had a chance; but he forced an excellent save from Nathan Gartside on a what could have been a certain goal. With Derry City holding firm, the ball fell to Cameron Dummigan on the edge of the area, but his effort smashed off the bar.

That was as good as it got for Dundalk but Derry must be given credit for their defensive resolve.

Both sides now look to this weekend for another chance to grab their first three points of the season. Dundalk must turn ample possession and chances into goals. Derry’s counter-attack needs to be more clinical.