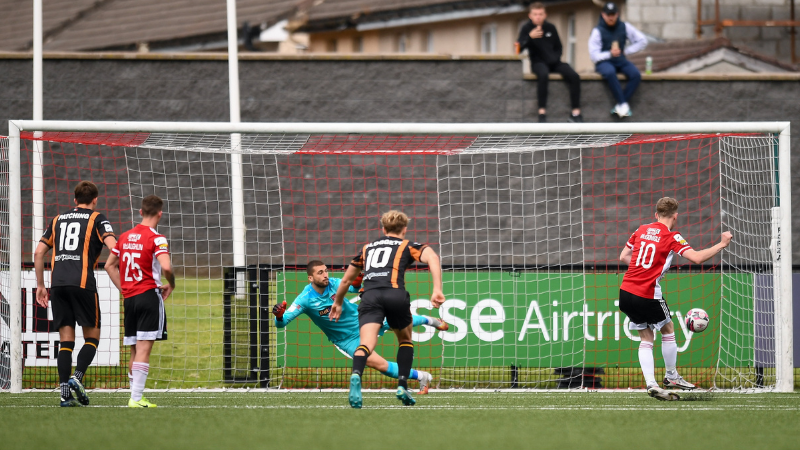 Derry City earned their first home win over Dundalk since 2012 after they beat the Lilywhites 1-0 at the Brandywell today in the SSE Airtricity League.

The home side came out running at the opposition and created several early chances.

McGonigle came close but headed over early in the game while Danny Lafferty, ever the menace with his runs down the left-side, also had a chance but opted to cross rather than shoot but found no teammates in the visitor’s box.

Evan McLaughlin also hit a decent effort from outside the area but directed it straight at Dundalk keeper Abibi.

Derry’s high work rate was successful in disrupting any attempt by Dundalk to hold possession and it took nearly 15 minutes for the visitors to play with any confidence.

Things changed as Dundalk’s Derry native Patrick McEleny began to orchestrate play for the Lilywhites, bringing Michael Duffy and Daniel Kelly, who had a good chance saved by Derry keeper Nathan Gartside, into the game.

McEleny didn’t last much longer however, going off injured in the 27th minute while Daniel Kelly followed 10 minutes later, having also sustained an injury on the Brandywell’s artificial surface.

Both sides each had good spells as the half wore on but neither really threatened until late in the half.

David McMillan had two decent efforts saved by Derry’s Gartside while Joe Thomson came very close at the other end, hitting the post before the sides went in level at the break.

Derry came out strongly again in the second 45 and were soon rewarded when Dundalk defender Andy Boyle was deemed to handball in the box in an effort to dispossess McGonigle.

A penalty was awarded and McGonigle stepped up to hit it into the right corner to put the hosts 1-0 up.Dundalk tried for the rest of the game to get even but an attacking threat was distinctly absent and the visitors could not better the Candystripes defence.

It was Derry who always looked the more likely to score again and excellent hold up play by James Akintunde up front saw the home team’s forward balls often stick in the Dundalk half. Things were made even more stark for the visiting side when striker David McMillan became Dundalk’s third casualty of the game and went off injured in the 84th minute and Dundalk had to finish the game with 10 men.

Several minutes of added time didn’t concern Derry City whatsoever as Dundalk continued to look anything but sharp going forward, and the home side finally got one over the Louth club at the Brandywell.