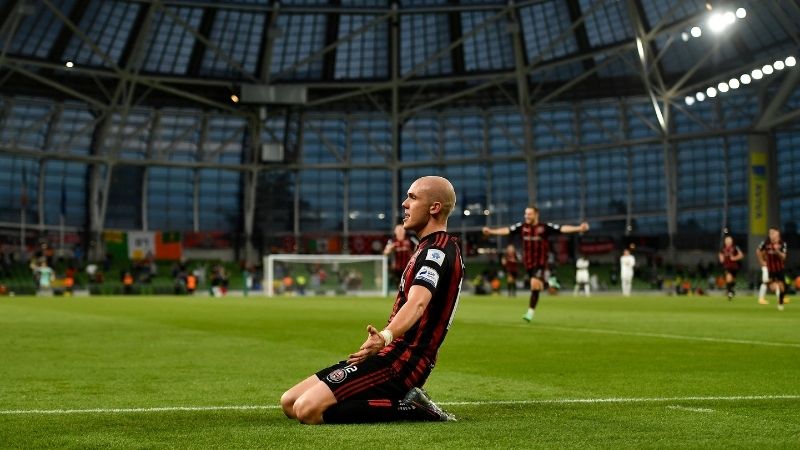 Bohemians are through to the third round of qualifiers for the Europa Conference League, after a 3-0 win over Dudelange at the Aviva Stadium tonight.

A first half header by Rob Cornwall, and a second half brace by Georgie Kelly, did enough to see the Dubliners qualify, winning 4-0 on aggregate.

Bohs threatened early, despite leading the tie 1-0, they did not seem to sit back from the off. Ali Coote had two early chances at goal, sending a free kick over the bar, before having a shot saved by the Dudelange goalkeeper. Ross Tierney also had a chance, his header however going wide of the target.

It was all the home side, playing across the city from their traditional home at Dalymount Park, who dominated the opening exchanges. Kelly having a half chance in the 10th minute, his glancing header flying just wide.

The breakthrough came in the 34th minute from an unlikely source, a fantastic free kick by Anto Breslin on the far side, found Cornwall in space and the centre back nodded home to give his side the lead.

After Bohemians forged ahead, they never looked like giving up their advantage. The visitors had a handful of chances in the opening half, but nothing that brought a sweat from James Talbot.

After the restart it was all Bohs again. After a couple of half chances, Georgie Kelly managed to double his side's advantage in the 69th minute. Another free kick this time taken by Coote, he found another centre back this time it was Ciaran Kelly free at the back post, he sent a header across goal, and the big forward managed to power home a header from close range.

The home supporters were in dreamland, and just four minutes after making it 2-0, Georgie Kelly found the back of the net for a second time. It came following fantastic work by Liam Burt, who won back possession, and broke at the Dudelange defence. He played a fantastic through ball to Kelly, who finished to the near post.

Bohemians now meet Greek side PAOK in the next round. The first leg of which will take place in the Aviva Stadium next Tuesday,