Pea’s produce the goods to deliver win over Treaty 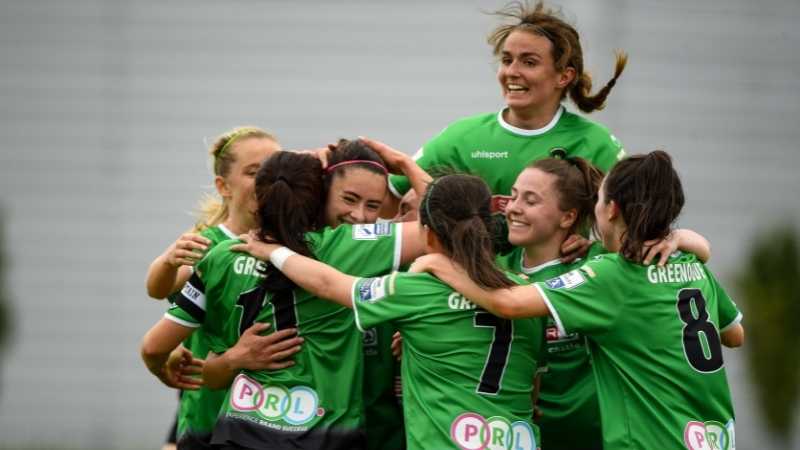 An early first half surge from a dominant Peamount established a lead that they never relinquished, on the way to a 5-1 home win over Treaty United at PRL Park.

Goals from Áine O’Gorman, Stephanie Roche, Jetta Berrill and Sadhbh Doyle made it 4-0 at the break. Treaty battled back tremendously and Emma Costelloe scored the goal of the match to leave it 5-1 on the night.

Treaty will take great heart from their performance as they more than matched Peamount in the second half.

The home side started the game with a really high tempo and intensity that seemed to catch Treaty off guard. The immediate pressure won an early corners as Peamount dominated possession and the ever tenacious Aine O’Gorman fired a fantastic shot to hit the upright. She was not to kept out though as she scored, and set up Stephanie Roche for the second goal after a great individual run on the left wing.

Despite a ferocious work-rate from the Treaty defence, Shannon Tarbat at times very impressive, Peamount were completely dominating the game. Jetta Berrill, who played excellently throughout, scored at the back post from a McEvoy cross. Sadhbh Doyle made it 4-0 to Peamount after good work in midfield from the home side in an excellent team goal. In the second half, Berrill added to her tally with a driven low shot from outside the area.

However, Treaty responded quickly and in truly excellent fashion. After great work from Gibson , she set up a terrific strike from Emma Costelloe brings one back for Treaty. And it really was a wonder strike to grab a goal and make it 5-1.

For Treaty, Michaela Mitchell grew into the game at centre-back for Treaty, and despite the score line, she played with determination throughout. They were aggressive throughout the game and never gave in. They will definitely grow as the season progresses. For Peamount, it really was a complete team performance, as noted by their manager in acknowledgement of their team play.

Peamount manager James O’Callaghan was glad to get the win, crediting his sides combination play which unlocked the Treaty resistance. Speaking to FinalWhistle.ie after the game, He also complimented the visitors on their vigour in the second half, as well as noting the impressive performance of debutant Tara O’Hanlon.