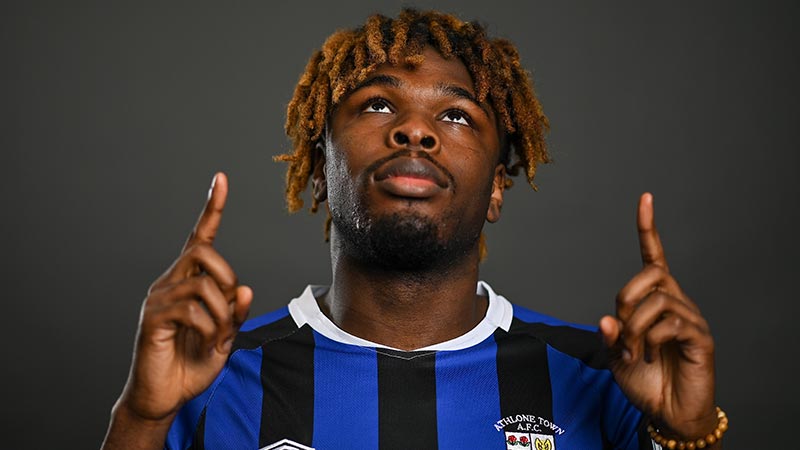 Aaron Bolger was the hero for Cork tonight, scoring a screamer in injury time to win it against Athlone.

Thomas Oluwa put the hosts ahead under a minute in. Cian Murphy would equalise for Cork in the second half, after much pressure. Bolger pinged one in from 30 yards for the winner.

This one got off to a hectic start, with Oluwa going bombing down the left in the very first minute. His ball across was met by Oisin Duffy, whose effort was blocked. The ball out was crossed back in by Stephen Kenny, whose ball was met by Thomas Oluwa to give Athlone a shock lead.

This was a quiet first half for the most part. Kenny had a double chance after the half hour mark but to no avail. Bolger had a penalty shout when he was checked by Oisin Duffy down the other end, but the ref waived it away.

Athlone went down to ten five minutes after the restart. Kenny had been booked for an off the ball incident just after the restart and was then penalised for a silly late challenge on Kieran Coates. This would bring pressure the rest of the way.

Pressure started to come around the hour mark and Cork equalised in the 66th minute. They won a free on the left and Matt Healy crossed in, with Cian Murphy rising to the occasion to score.

This was nearly flipped on its head a minute later when Oluwa turned Cian Coleman in the box and won a penalty. He took it, being denied by David Harrington before missing the rebound with the goal gaping. An absolutely crucial moment.

In the 78th minute Cork nearly gifted it back. A Harrington and Coleman mix up allowed Oisin Duffy to loop a header goalwards before Coleman cleared it off the line. Bolger then cleared the ensuing corner off the line. This would not be his only heroic act.

Aaron Connolly nearly sent the place into a frenzy two minutes from time when he caught the ball on the half volley from halfway and forced Harrington to push it onto the post. The crazy ending had one last twist, however.

In the 95th minute, Bolger got it onto his right. Without any pressure, he struck it from 30 yards, finding the net. An absolute peach to win it for the league leaders, who solidify their place on top.