Pat’s keep up pressure at the top 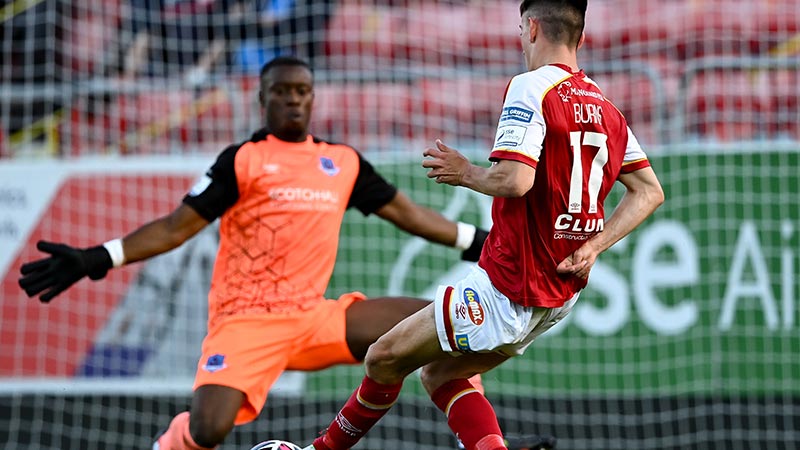 St. Patrick’s Athletic go second after they brushed aside Drogheda in Richmond Park with a 2-0 win.

Chris Forrester opened the score on the hour mark after some good set up play by Burns, who was arguably man of the match in sunny Inchicore.

The Drogs defended well for periods but never threatened and Robbie Benson finished the game in the 78th minute with a cool finish past David Odumosu.

Despite starting the game lethargically, the Saints dominated the second half and the visitors looked spineless. Pats controlled the match as soon as they went ahead and saw out the three points in front of 1,000 spectators.

Drogheda had been disciplined up until the first goal with Dan O’Reilly and Dane Massey providing their usual solidarity.

They had settled for sitting back and tried to snatch a goal on the break, but once the hosts went ahead it was evident the Louth side were out of the contest.

The first half wasn’t much more than a feeling out process. It felt like there was an opportunity for some spells of possession for the away side but they weren’t brave and tried to move the ball up the pitch prematurely.

The hosts came out a new outfit in the second half. Forrester and Burns in particular shot into life when their team needed it, putting dangerous balls in the box and taking on their men. At this stage it became apparent that Drogheda needed bodies behind the ball to get something from the game.

Credit where credit is due though, Tim Clancy’s men worked very hard and it felt they might have the ability to see the game off at one point. It was the fact they had no real counter on the break that led them to be overwhelmed at the back.  Young substitute Jordan Adeyemo couldn’t really get any space up top.

The Saints broke through on the hour when Burns teed it up for Forrester to tap it in. They doubled this lead when Robbie Benson scored from Matty Smith’s rebound after 78 minutes and it was game over.

Meanwhile Lee Desmond delivered a flawless performance in defence and keeper Vitezslav Jaros had excellent distribution. This win puts Pats in second and keeps them joint with Rovers on points after they also beat Derry tonight.