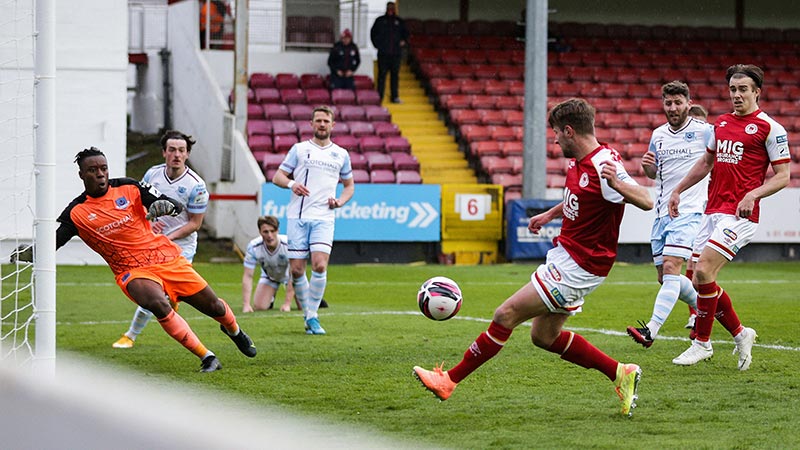 Billy King was the hero as his injury time winner meant all three league points stayed in Richmond Park after Drogheda United thought they had done enough to secure a draw in their SSE Airtricity League clash this afternoon.

138 days after the last game played at the ground, Richmond Park was the arena for today's visit of the Drog's to Inchicore. The hosts came into the second round of games after a solid performance a week ago against Shamrock Rovers as the newly promoted First Division champions arrived at Inchicore off the back of winning their season opening clash with Waterford.

With several moments of dominance for both teams, with a slight advantage for the home side, St. Patrick’s smiled at the end as Billy King's heroic late goal guaranteed the three points. Especially after a mistake from their goalkeeper Jaros had allowed Drogheda to level matters in the final quarter hour.

The windy afternoon at Inchicore saw the Saints dominate the early stages. A couple of good opportunities by Matthew Smith and Ronan Coughlan tested the Drogheda goalkeeper and with just six minutes on the board, Jason McClelland came close to change the score with a shot drilled into the side netting.

Most of the game was happening deep inside Drogheda’s territory with Pat's controlling possession and keeper Jaros playing a spectator's role.

The Drogs managed to balance the scale and hold the opponent’s momentum and even came forward in the sixteenth minute as Darragh Markey whipped in a cross, finding Mark Doyle inside the box but his finish went over Jaros’ bar. After the half hour, the chances dried up while the intensity of the game dropped considerably.

Stephen O'Donnell's men came back stronger after the break and got the biggest chance to score so far inside the first 60 seconds as Robbie Benson was unable to finish from inside the six-yard box after brilliant work from Matty Smith.

The Scottish forward came back from the changing rooms with a new vigour, creating opportunities as Odumosu, in the Drogheda goal was forced into action to stop a low drilled shot from the tricky winger.

After so many opportunities Pat's finally hit the target. Just over the hour mark Robbie Benson created space on the left side and sent in a cross resulting in a loose ball as the fox in the box Ronan Coughlan bundled it home, marking his first goal for the club.

Against the run of play, a long range effort from Mark Doyle was fumbled by Jaros and substitute Dinny Corcoran didn’t need to be asked twice as he scored the equaliser from close range. Drogheda pushed forward and looked the most likely to get a winner as Jaros got tested several times under Drogheda’s pressure.

Right at the death and with both teams resigned for the draw, Robbie Benson’s replacement Billy King was found at the back post by Darragh Burns’ cross and his cool finish confirming the win for Stephen O’Donnell’s troops.