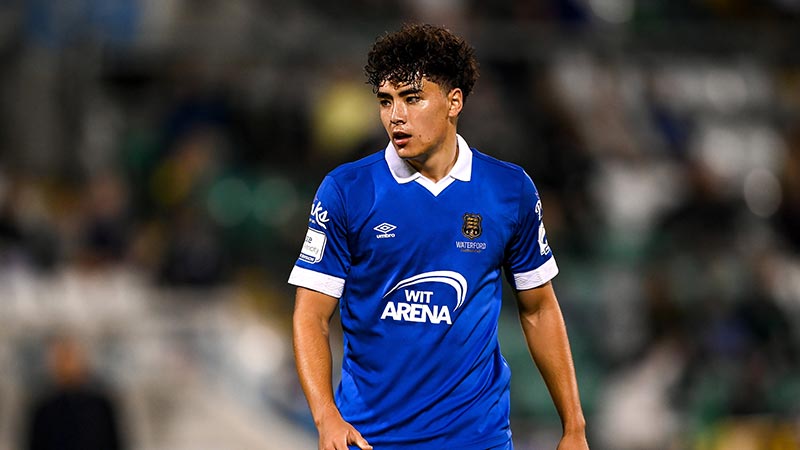 Constantly on the offensive, the home side looked the hungrier throughout the game and could have scored more had they been more clinical in front of goal.

With their top-flight credentials at stake, Waterford looked the far hungrier side as they went in search of a vital three points.

The attacking trio of Patterson, Armando Junior Quitirna and Prince Mustwunguma were a real threat for the Blues going forward and caused the Drogheda defence numerous problems.

Prince came close with a great shot on the turn on nine minutes while Patterson and Junior combined well in attack soon after only to be denied by Drogs keeper David Odumosu.

Odumosu stepped up again a minute later to save another shot by Patterson and keep the visiting side in the game.

Drogheda relied on the counter to keep the home side on their toes and the pace of Jordan Adeyemo up front did provide an attacking threat for the visitors with what little ball they could provide him.

After a volley of early chances for Waterford, the game lost a bit of life after 20 minutes and both sides exchanged possession without ever really threatening the other.

Killian Philips headed a decent chance over from Drogheda's third corner of the game just before half-time and the sides went into the break level at 0-0.

The second half started with the home-side attack players once again making an impact.

When Prince made a break in midfield, he was pulled down by Gary Deegan who received his second yellow of the game and leaving his side down to 10 men with 42 minutes still remaining in the second half.

The Blues took full advantage from the following set-piece, implementing a training ground move which saw the ball rolled to Patterson at the edge of the box. He struck the ball powerfully and though Odumosu got a hand to it, but he could not stop it from crossing the goal line.

With their numerical advantage and vocal home support, Waterford dominated for the remainder of the game.

Patterson's strong running tormented the Drogheda defence while Cameron Evans, Junior, and Anthony Wordsworth all had chances to double the side's lead.

As the match entered its final stages, Drogheda attempted to equalise but a number of long balls sent into the opposition half failed to beat the Blues' defence.

Waterford held on for a vital three points which sees them stay a point ahead of Dundalk in a race to avoid the threat of relegation.