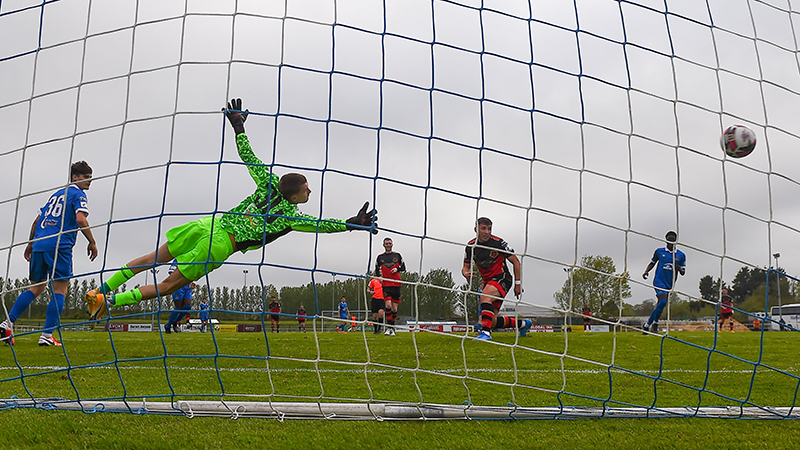 Waterford’s Under 19 squad fell to a 7-0 thrashing at home to Drogheda United, courtesy of braces from Chris Lyons and Dane Massey, with further goals from Darragh Markey, Mark Doyle and Killian Phillips.

Former co-managers Kevin Sheedy and Mike Newell departed the club earlier this week and the Blues were made to name an academy side for this matchup, due to the squad’s close contact with a confirmed Covid-19 case.

Despite an encouraging and hard-working display from Waterford’s youngsters, they were up against it from the off, and it didn’t take long for the floodgates to open wide.

The Blues youthful backline lasted until the 17th minute before Drogheda broke the deadlock through a sublime solo effort from Markey, as he glided through the defence and stayed cool and composed in front of goal.

United’s lead was doubled six minutes later, as Doyle made it two with a great finish for his fourth of the campaign; after being picked out from a free kick to slot home.

Three minutes later, and the game was all but over, as Drogheda added a third through Massey who was picked out by a good delivery from Doyle.

After 39 minutes, the away side led 4-0 as Lyons scored after being assisted by a clever ball by James Browne, who picked up his fourth assist of the season.

On the stroke of half time, Drogheda won a penalty as Sam Morrissey fouled Lyons, who cleverly used his low centre of gravity to win the spot kick.

Lyons made no mistake from the spot and scored his second of the night with a powerful finish past the helpless Kyle Cooke in the Waterford goal.

Massey then found the net for the second time in this match, through a spectacular half volley at the back post, after being picked out by Gary Deegan.

Phillips then ended the rout to make it seven three minutes from time, as he scored from close range following a corner.

This result means Drogheda move up to fifth on 13 points, whilst Waterford lie at the foot of the table in tenth on six points.