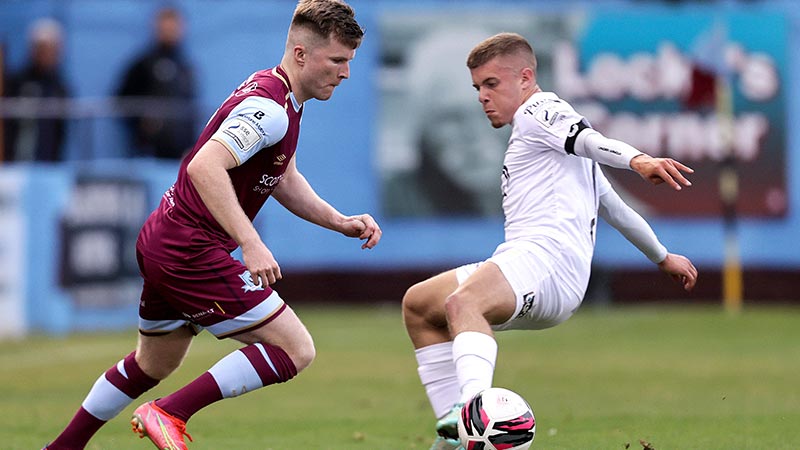 An 83rd minute strike from substitute Armando Junior Quitirna proved to be the difference as Waterford came away 2-1 winners over Drogheda United at Head In The Game Park.

Marc Bircham’s mission to keep the Blues from relegation is looking more likely.

The first half was one of very few chances. Both sides struggled to work the goalkeepers.

Drogheda’s first opportunity of note came as Mark Doyle was picked out with a wonderful ball. He spotted Waterford ‘keeper Brian Murphy off his line and tried to loop the ball over him. However, his effort was just over the bar.

Cian Kavanagh got Waterford’s first real chance as he was put in behind the home side’s back line but could not keep his strike on target as he was under a lot of pressure from the Drogheda defence.

As both teams went into the dressing rooms at half-time it was a very evenly matched affair.

It was Waterford who eventually went ahead in the 51st minute. Shane Griffin whipped a free-kick into the box and John Martin was there to glance it into the top corner giving David Odumosu no chance in the Drogheda net.

The home side drew themselves level less than 20 minutes later when Daniel O’Reilly’s long ball found the run of Ronan Murray in behind the Waterford defence. Murray took a great touch and squared it to Jake Hyland who easily dispatched into an empty net.

The visitors went ahead again in the 83rd minute through substitute Armando Quitirna Junior who received the ball in the box. The ball was behind the winger but he did well to turn and let his shot go finding the net and securing the three points for his side.

Anthony Wordsworth received a red card late on for what seemed to be dissent.

Marc Bircharm will be delighted that his side were able to continue their recent form and pick up another win.

Tim Clancy will be disappointed that Drogheda could not hold on and get a point especially considering that they were at home.