Kenny and DeVries deliver for Sligo 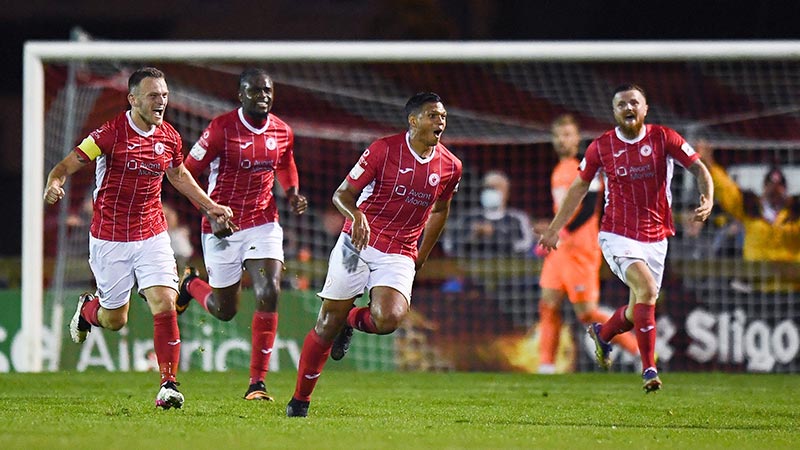 In front of a bumper crowd, Sligo Rovers found their first victory in 10 weeks with first half goals from Johnny Kenny and a wonder strike from Ryan DeVries just before half time the difference.

Kenny fired from a penalty, while DeVries effort came just before the break, in a game where St. Patrick's Athletic failed to take their chances.

Sligo got off to a dream start as Mahon was taken down to be awarded a penalty in the opening minutes with youngster Kenny stepping up and confidently smashing the ball past Pats Keeper Vitezslav Jaros.

As the half grew on the Dublin outfit were in the ascendancy peppering McGinty’s goal with shot after shot, the young Scot equal to each and every attempt.

There was a second penalty shout for the home side just after the half hour mark as Mahon was once again pulled down in the Pats box - however, he was adjudged to have been in an offside position initially.

Moments later a big chance arose for the Inchicore side as McGinty parried a Burns effort into the path of former teammate Ronan Coughlan, Mahon however, came to the rescue to deny the Limerick native with a massive interception.

As the side exchanged attacks DeVries stepped up with a wonder strike from 25 yards, aided by Andre Wright as he blocked off the defender, beating Jaros in the town end goal on the stroke of half time.

After the restart it was much of the same, with the Reds having the lion’s share of possession, as the Bit O’Red faithful roared on with Mahon, Garry Buckley and Greg Bolger all putting their bodies on the line for the pride of their shirt.

The game erupted as Kenny got away with catching Burns in the box, as the away side legitimately laid claim to a penalty, referee Paul McLoughlin thought otherwise.

Rovers emptied the bench with defensive reinforcement as well as a cameo debut for midfielder Melvyn Lorenzen as they held off a vociferous St. Pats side holding onto a tenth clean sheet of the season.

A quick turnaround for Rovers as they host Dundalk on Tuesday evening before the visit of league leaders Shamrock Rovers. Pats however host Wexford in the FAI Cup next weekend before also hosting the Tallaght side in the next round when they return to league action.