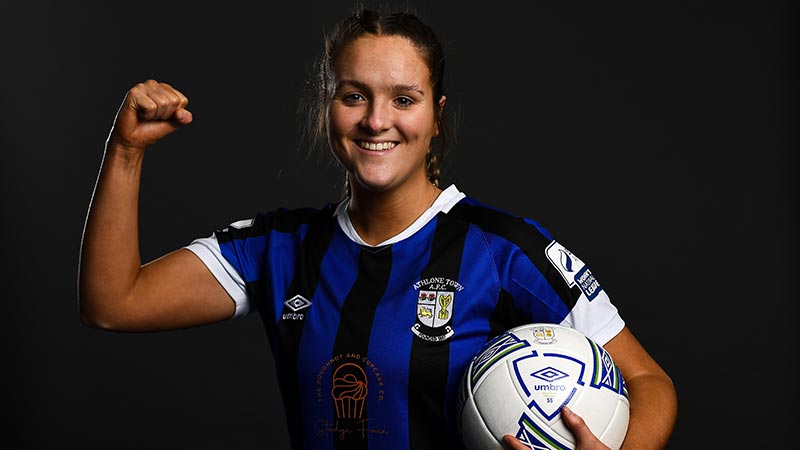 Athlone Town earned their second win of the WNL season with a 2-0 win over Treaty United in Markets Field this evening.

It took effort after a frustrating first half, but goals from Kelsey Munroe and Emily Corbet in the second half saw them take three points back up the Shannon.

Athlone tested Treaty with a pair of frees around the five minute mark, with Kelsey Munroe trying both. Her first effort was way out and ended up straight in Michaela Mitchell’s arms. The second one was from just outside the box, but Munroe over-hit it.

Athlone had a pair of chances in the 17th minute when Kellie Brennan met a cross but failed to get any power on it. The clearance would find Kayleigh Shine, who lashed her effort over the bar.

Mitchell pulled off a good save in the 25th minute when a clearance came off Rita Lang, which caused Mitchell to dive to her near post to pull off the save.

On the brink of the half hour mark, Kellie Brennan got the ball in the box and turned and shot, but the effort was straight at Mitchell.

Gillian Keenan had the last chance of the first half when she pressed Jessie Mendez high, winning the ball and taking it onto her right, but firing straight at Mitchell.

Around the hour mark Lauren Keane was introduced and it got lively for Treaty. Keane herself had a good chance for an effort at goal, but opted to square it, resulting in an intervention and a Niamh Coombes collection.

A minute later Keenan sent in a cross which Shine met, but like her first half attempt it was lashed over.

Treaty had a golden chance in the 65th minute when Mendez found herself one on one with Coombes, but the Athlone shot stopper held firm.

This was capped off in the 69th minute when on the counter, Muireann Devaney found Emily Corbett, who ran through and rifled in. It was game management from here on out.

Corbett could have added another three minutes from time when it sat up for her, but she fired wide. Nonetheless, Athlone will be pleased with the result.