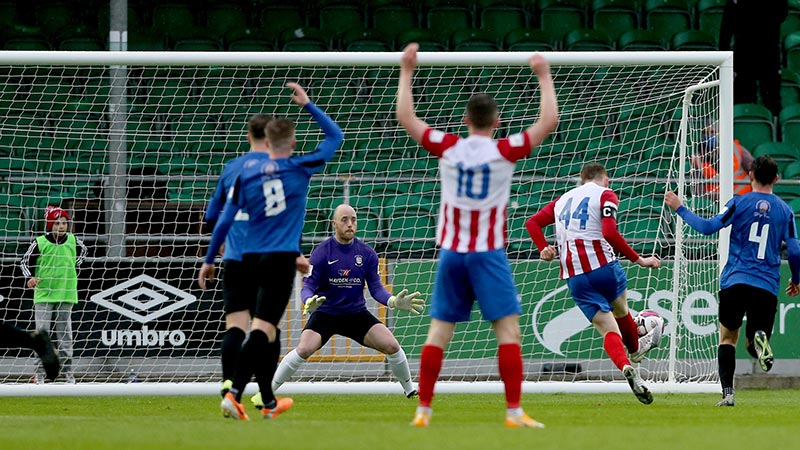 A fantastic pass from Sean McSweeney split the Athlone defence and played Lynch through, who tunnelled through and finished past Town keeper, Micheal Schlingermann.

Despite Athlone having the majority of possession, the home side deserved the win as they created the better chances.

This result sees Athlone’s third defeat in a row, while Treaty bounce back from their 3-2 loss to UCD last week.

The two teams are now level on points in the SSE Airtricity League First Division.

The start of the game was very scrappy but Athlone seemed to take control after 20 minutes. However, they failed to create any chances of note.

After taking the lead, Treaty began to look more dangerous with a few strikes on goal that tested Town shot stopper Schlingermann.

At the opposite end, Tadhg Ryan would have hoped that the second half would be as easy for him. And it mostly was, with Athlone only forcing the Treaty ‘keeper into one notable save from close range.

The Limerick outfit had a couple of chances to double their lead through Lynch, who found himself free of the away side’s defence all night.

Joel Coustrain came on in the 58th minute and the Midlanders struggled to deal with him as he ran their defence ragged.

Athlone had two great chances to draw themselves level in added time. Jack Reynolds crept in at the back-post, but he saw his header loop over the bar. Adam Wixted also had an opportunity through a free header, but he failed to keep his effort on target as it went wide of Ryan’s goal.

Despite having the bulk of possession, Athlone were not convincing enough in front of goal – something which seems to be a regular occurrence for The Town over the past three weeks.

The home side looked to be the more dangerous of the two, and their three points were well deserved.

This result sees Athlone’s third defeat in a row, while Treaty bounce back from their 3-2 loss to UCD last week.

The two teams are now level on 15 points in the SSE Airtricity League First Division.