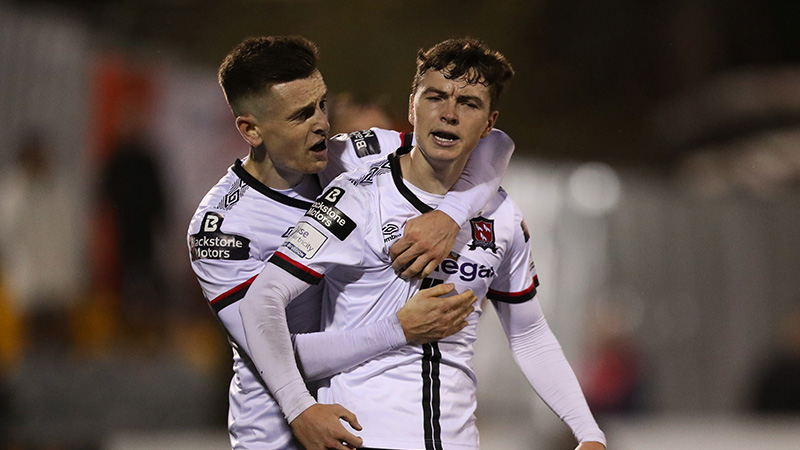 Keith Ward bagged the all-important equalising goal in a thrilling contest in Caseys’ Field as Sligo Rovers and Dundalk had to settle for a share of the spoils in a 3-3 draw that could prove to be a vital point for the Lilywhites.

There was certainly no going through the motions as both sides took the lead in the contest before Ward's late goal sealed a vital goal in added-on time.

Frank Liivak opened the scoring for the visitors before two excellent individual efforts from Alfie Lewis and Ryan O’Kane put Dundalk ahead.

A late brace of goals late in the game from Aidan Kenna and Mata looked to have ensured the points were heading back west but Dundalk took one last roll of the dice with Ward doing the rest.

The opening exchanges were all in Dundalk’s favour as a free kick from John Mountney was headed down to Runar Hauge but the wingers' volley went high over the bar.

Sligo against the run of play almost opened the scoring as Aidan Kenna beat the offside trap Nathan Sheppard was caught between Macari and Kenna with the striker hooking his effort over the Dundalk netminder and with the ball looking goalbound Macari somehow cleared it off the line.

Sligo was to open the scoring with Frank Liivak latching onto the ball at the back post to slot it past Sheppard. A corner that Dundalk fail to clear saw the ball fall to Liivak who slammed it home.
Dundalk was to draw level when Runar Hauge broke free of the Sligo defence as his shot rebounded to Alfie Lewis with the Dundalk midfielder striking a thunderous effort that flew into the back of the net.

Dundalk continued to press early in the second half with Alfie Lewis spotting Brush off his goalline and he tried to chip the ball but it sailed over the bar.

Aidan Kenna counter-attacked for the visitors as his vicious shot took a deflection off Leahy that easily could have found its way into the net. Dundalk was to go in front after another fantastic run from Hauge saw his cross find Ryan O'Kane at the back post and he fired a low effort past Brush.

The goals kept coming at Casey's Field as Sligo drew level with Aidan Kenna breaking into the Dundalk area and hitting a well-struck effort that crept past Sheppard. It was to go from bad to worse as Max Mata was to score Sligo’s third and put them in the lead with a shot taken with ease for the Bit O’Red.

The drama was far from over at Oriel Park as Andy Boyle’s long ball was knocked down excellently by John Martin with the ball finding its way to Keith Ward who calmly slotted it past Brush to score Dundalk’s third goal to level the tie.

Ward’s goal could be priceless – it could put them on a flight for Europe next season.