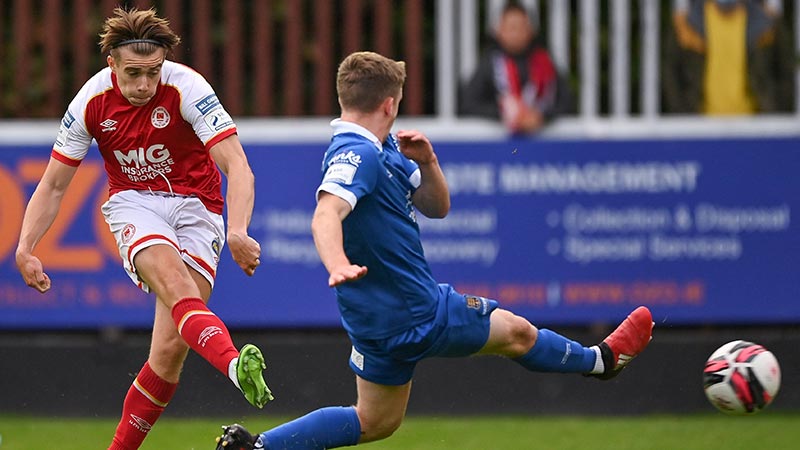 Title pushing St Pats continued to keep up the pace with league leaders Shamrock Rovers, as they ran out 2-1 winners at home to Waterford in the Premier Division tonight.

St Pats are now joint top of the table but have played two extra games, with Shamrock Rovers in action on Sunday against Bohemians.

The match finished ugly as Lee Desmond was stretchered off after a nasty looking head collision with his goalkeeper Vitezslav Jaros.

Waterford started the game brightly with their tricky winger Junior Quitirna causing the St Pats defence problems with his pace and trickery.

Ben McCormack had the game’s first clear cut chance as a sloppy mistake by Waterford keeper Brian Murphy led to the midfielder’s attempted lob, that just found the roof of the net.

The hosts took the lead midway through the first half through Matty Smith who scored his eight goal of the campaign.

Nahum Melvin Lambert produced a poor clearance that teed up Smith, who fired the ball into the net in a one on one against his former club.

The in-form attackers day ended on a sour note two minutes later as he was forced to be replaced with a hamstring injury.

Waterford started the second half well and without testing Jaros managed to get a foot hold in the contest.

But they found themselves two behind after a great cross by Ian Bermingham picked out Reading loanee Melvin-Lambert, who rose well and cooly headed the ball into the net.

However, Waterford were back in the game when they were awarded a penalty through Quitirna’s trickery to get past the St Pats defence and the winger was eventually tripped by Bermingham.

Quitirna stepped up to take the spot kick and powered the ball into the net to set up a grandstand finish.

The hosts saw the game out comfortably until deep into stoppage time when Paddy Barrett looked to have brought down Cian Kavanagh with a shoulder barge, but the referee waved away the appeals.