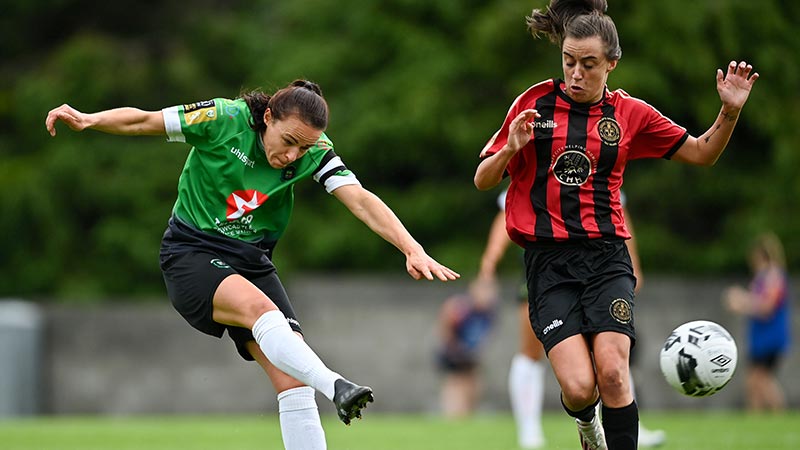 Peamount patience pays off off as strikes from Aine O’Gorman late in both halves earns a hard fought win against a stubborn Bohemians side at PLR Park in Greenogue.

Irish International O'Gorman delivered a goal in either half - the first coming in the 38th minute; before delivering for the second time 11 minutes from the end.

This game was a slow burner, with neither team able to get a real grip on matters in the first 20 minutes with both teams coming close - Peamount through top scorer Eleanor Ryan-Doyle whilst Bohs attackers Abbie Brophy and Erica Burke was the attempted to torment the Bohs defence on a number of occasions.

The home side played patiently working the ball into dangerous areas several times only to find Bohs keeper Maguire equal to anything that came close to her area.

Peas pushed to break the deadlock however the stubborn Northsiders defence stood firm with Bronagh Kane and Ally Cahill putting their bodies on the line when needed. The opening goal came when Alannah McEvoy broke forward on the left, her cross found O’Gorman who headed it into the Bohemians net for her seventh goal of the season six minutes before the break.

That goal seamed to spark something in the Bohs players with Burke catching Dora Gorman in possession, Burke, one on one with onrushing Naoisha McAloon in the United net, drove her effort just with of the upright. This was a close call for Gorman who could only look on in despair.

The half ended with a flurry for Peamount after surviving that scare with Sadhbh Doyle coming close rattling the side netting in additional time.

The second half started lively with O’Gorman looking for her second with a strike from distance, however, she was way off with her attempt.

Bohemians almost got an equaliser as there was calamity at the back for Peamount but they get away with it, McAloon smashes it off her own player but Burke is unable to capitalise.

As Bohs pushed for an equaliser, Peamount broke through McEvoy who struck straight at Courtney Maguire, and Ryan-Doyles found the net but her effort was deemed offside.

Bohemians continued to push on but were unable to take advantage of mistakes at the back by the Peas.

This left gaps at the back for United to exploit with just over ten minutes to play, O’Gorman, received the ball on the edge of the area, turn and hit the back of the net with a sweet left footed strike.

The home side were buoyed by the doubling of their lead, tried to push for a third when substitute Megan Smyth-Lynch only minutes after coming on received extensive treatment which say the deployment of the stretcher, however the former underage international opted not to use it.

Bohemians pushed for a consolation in added time but were almost hit for a third when O’Gorman once again struck only this time Courtney Maguire saved here team once more.

The Peas return to the top of the league by virtue of goals scored host Treaty United next Saturday while Bohs host DLR Waves in two weeks' time.