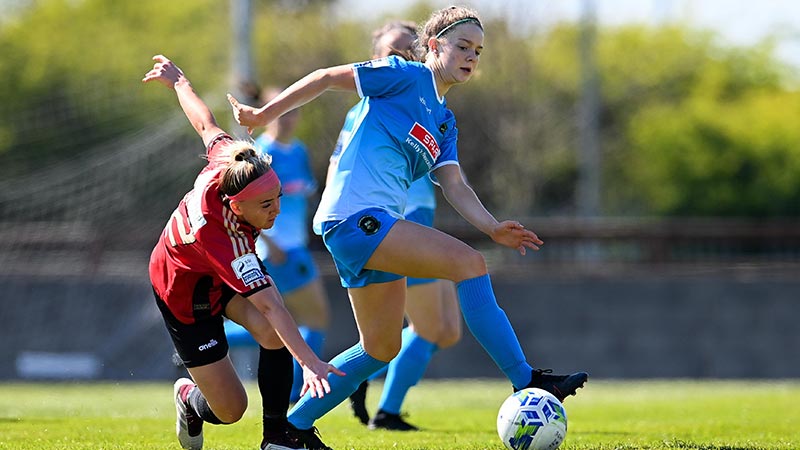 Bohemians showed a defensive master class in the first half only to succumb to the pressure set upon them by Peamount; as the current league champions put three past Bohs in a sterling second-half performance in the WNL at the Oscar Traynor Centre.

Megan Ruddy opened the scoring for the champions, before two quickfire goals from Eleanor Ryan-Doyle who came off from the bench, to add the attacking impetus needed and Becky Watkins put the contest beyond Bohemians and give the away side the three points.

Bohs will feel for their efforts, that the score-line doesn’t reflect the game, but it shows the clinical edge that Peamount possesses to swing the game in their favour, with some excellent attacking phases of play.

United took the test to their Dublin counterparts, and particularly the centre back partnership. Yvonne Hedigan could deal with the consistent attacks from Peas.

However, the league champions were limited to only long-range efforts and half chances. The best of the first half opportunities fell to the away side, as Watkins was sent through, after a clever pass forward, but Niamh Coombes was equal to the opportunity.

Megan Smyth-Lynch nearly scored from a corner, as her effort flashed across the face of goal and Coombes had to get a vital touch to send it out for another corner.

The latter continued to stop all in Peamounts wake with Áine O’Gorman and Dearbhaile Beirne both had efforts saved by the Bohs shot stopper.

On the restart Bohs pressed forward to try and create chances of their own and create an upset. An excellent cross from Chloe Darby found its way to Bronagh Kane, but her half volley was always rising.

Smyth-Lynch of Peamount once again had two goal chances in quick succession, however her initial shot was blocked, and her second went over the bar. Bohemians once again holding firm defensively.

The breakthrough did happen for the visitors, as in the space of ten minutes the away side found themselves three goals to the good.

Beirne provided an excellent cross into the area and Tiegan Ruddy slotted it past Coombes with a good finish.

Following a foul by Sophie Watters on the edge of the area second-half substitute Eleanor Ryan-Doyle struck an excellent free-kick which curled into the top corner. The third which put the tie to bed came two minutes later as Peamount broke from a Bohemians attack and O'Gorman fed Ryan-Doyle who crossed it to Watkins at the back post who calmly placed it past Coombes.

Bohemians continued to press forward but to no avail but for their defensive display today it was Peamount that showed that being clinical in attack is the mark of champions.