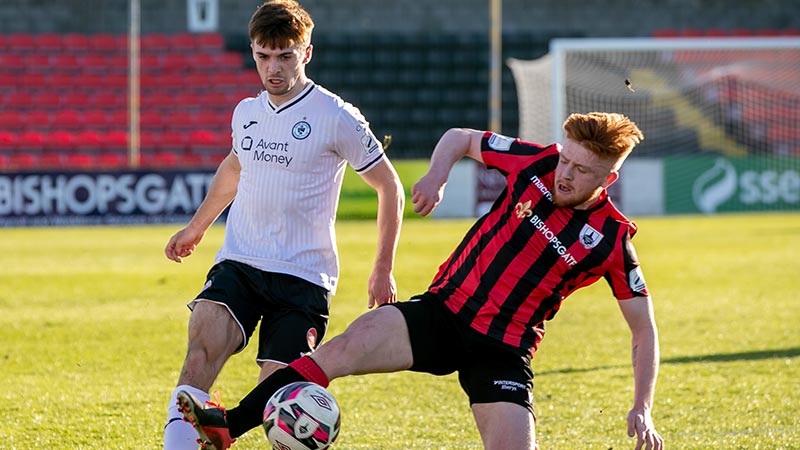 Sligo Rovers maintained their unbeaten start to the season with a narrow one-nil victory away to Longford Town at Bishopsgate as a Gary Buckley second-half header secured all three points for the Westerners.

Both sides made one change to their teams that started last weekend. Longford Town brought in Callum Warfield for Sam Verdon in the lone striker role, while Sligo Rovers replaced Walter Figuiera with skipper David Cawley in midfield.

Sligo shaded the first half and created the better chances, the first of which arrived in the seventh minute, when Sligo defender Robbie McCourt directed a twenty-two yard free-kick into the Longford side-netting.

On twenty-one minutes, Sligo created another opportunity but a Jordan Gibson shot from just inside the Longford box that went through the legs of several players was well gathered by Town keeper Lee Steacy.

The Town’s best chance of the opening half arrived on thirty-three minutes. Substitute Callum Thompson whipped in a cross from the right that picked out Warfield, but he fired his effort into the Sligo side-netting.

The best opportunity of the first half went to the visitors on the forty-minute mark, but they were thwarted by a brilliant save from Town keeper Steacy.

Niall Morahan’s superb pass found Romeo Parkes just inside the Town box, he expertly held the ball up and then laid it off into the path of striker Johnny Kenny, however, his rocketing curling sixteen-yard strike was magnificently tipped away by Steacy.

Gary Buckley put the visitors ahead just two minutes into the second-half. Robbie McCourt's corner from the right was headed back across goal by Parkes and Sligo defender Gary Buckley reacts quickest to head home from close range.

Town almost equalized on fifty minutes as midfielder Aodh Dervin pounced on a loose ball inside the Sligo penalty area only for his shot to flash inches wide of the post.

Longford’s final chance of drawing level came on eighty-three minutes but Dervin’s angled shot from twelve yards out deflected off a Sligo defender and went narrowly past the far post.