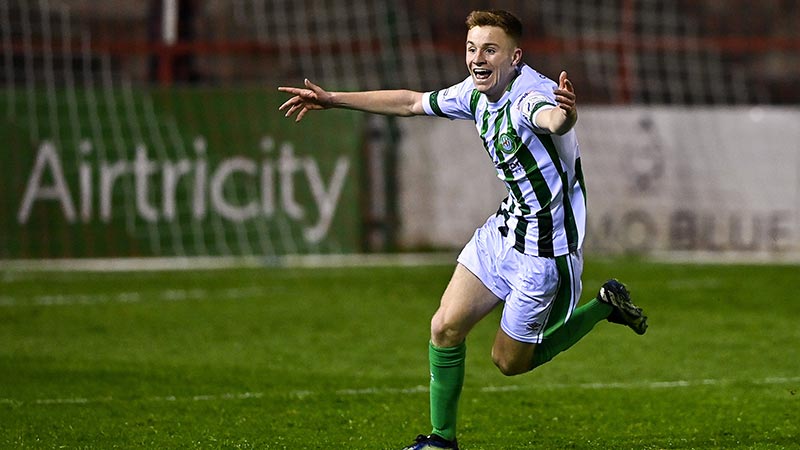 It was all even at St.Colman’s Park tonight, as a Charlie Lyons penalty in the 78th minute saved Cobh Ramblers from defeat, over what was a strong Bray performance.

The visitors dominated the majority of the possession and chances in the first half but were unable to make anything stick.

On the restart they capitalised through Shamrock Rovers loanee Brandon Kavanagh, getting on the end of goalkeeper Brian Maher’s long ball to score a beautiful lob in the 59th minute.

Bray were unable to find a late winner and will come away from this one feeling aggrieved. For Cobh they’ll certainly be happy to emerge with just a point and avoid the loss.

The first half was relatively quiet with both teams trying to find their footing.

From the start Cobh were extremely aggressive in closing down Bray’s defenders in order to stop Wanders distributing the ball short for their goal kicks.

When the Seagulls were able to get on the ball it was Kavanagh who pulled all the strings with his two early crosses finding Charlie Gallagher unmarked at the back post. However, the young midfielder was unable to make the most of his chances both times.

Bray continued their spell of form with Kavanagh allowed to roam all around the park; which led to him drifting onto the right side to collect the ball before cutting inside to flash an effort past the post.

The only real shot on target that happened all half came from a 25-yard strike from Richie O’Farrell was easily corralled by Sean Barron.

After the break Bray came out looking much more urgent with their play. Despite better interplay up front by Wanderers, it was a bit of opportunism that lead to their first goal in the 59th minute.

Bray keeper Brian Maher hit a speculative ball long effort, over the head of the Cobh defenders, which allowed Kavanagh to race in behind and take a touch.

The midfielder beautifully lofted the ball over the head of Sean Barron, from 18 yards out to give Wanderers the lead.

From there, the visitors were more than happy to keep the ball for long periods of the game. Cobh’s energy and pressing from the first half seemed to disappear as the game wore on.

It wasn’t until the 78th minute that a reckless challenge in the box from Bray midfielder Richie O’Farrell brought down the Ramblers John Kavanagh.

Referee David Dunne made no hesitation to point to the spot and award the penalty to Cobh. Lyons stepped up and sent Brian Maher the wrong way to knot the game up at one-all.

The Seagulls spent the last 10 minutes desperately searching for a winner with Connor Clifford and Luka Lovic both having chances on target, however, their efforts were in vein.

In the end Bray were unable to find a winner, and they end yet another week without a win while Cobh claim a valuable point to keep them off the bottom of the table.