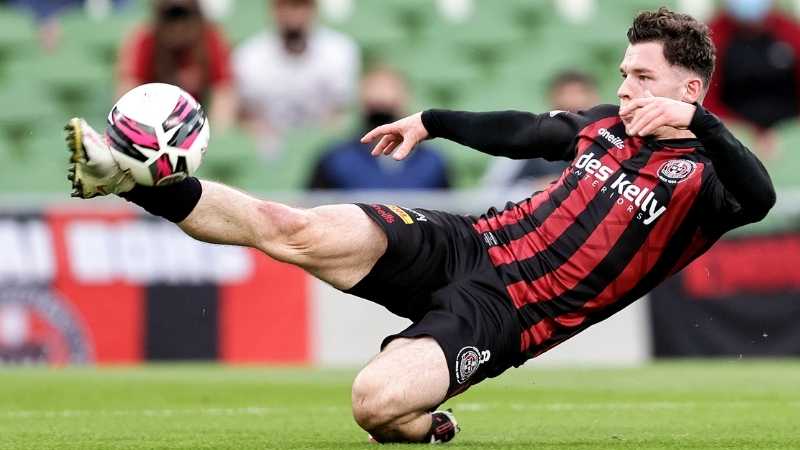 Bohemians were simply sensational as Ali Coote stole the show in their 2-1 win against PAOK at the Aviva Stadium tonight.

The victory gives Keith Long’s men an advantage heading into the second leg of their UEFA Conference League third qualifying round tie, next week.

Bohs fans exploded, as Coote scored from close range after 23 minutes, after a fantastic run from Georgie Kelly.

He then added to his tally with a 25-yard strike, that the visitor’s ‘keeper probably should have dealt with.

Nelson Oliveira halved the deficit with a header with ten minutes to go, making it a nervy finish.

The quality of the opposition was clear to see early on, as the Greek side dominated possession whilst Bohs stayed in shape and absorbed the pressure. Oliveira tested James Talbot in the opening stages with a low shot, as PAOK showed their teeth.

However, the home side were patient, and took their chance when it came. Andy Lyons pumped a long pass down the flank, and Kelly muscled his was past Michalidis. This opened up the opportunity for a pull back, and the onrushing Coote slid in to divert the ball into the net.

The Aviva Stadium was awash with shouts, cheers and celebrations, and there would be more to come.

After keeping hold of the lead into half time, Long’s side had to temper a string of early attacks from the opposition.

Once again though, it was the Dublin outfit that would make the most of their chances. An Anto Breslin corner made its way to Coote on the edge of the area, and the Scot took a speculative shot. It was straight at Paschalakis in the PAOK net, but his effort to punch it clear was calamitous. 2-0 to the underdogs, and once again, an eruption of emotion.

Oliveira made things a little nervy with a late header from a Schwaab cross, but Bohs hung on, to take a valuable lead into the second leg. It will be tricky without their own fans roaring them on in Thessaloniki, but there’s no reason why the Gypsies couldn’t cause another upset.