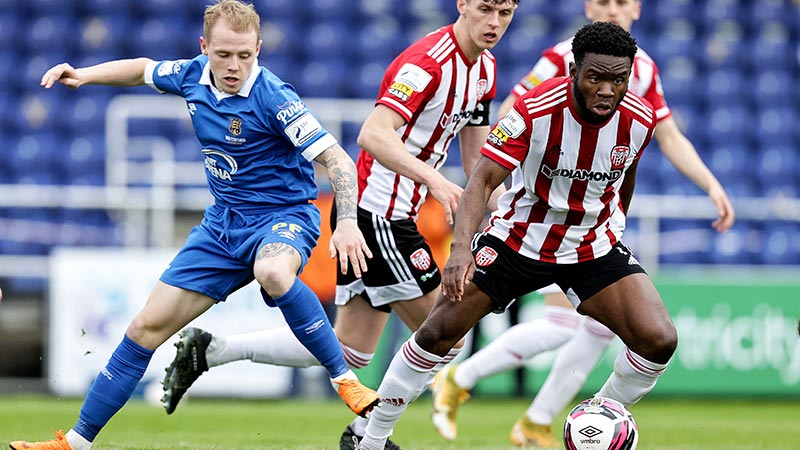 In a match which was one-way traffic from the off, Derry City's youth and experience told, to help brush aside an uninspiring Waterford side.

Candystripes debutant Evan McLaughlin opened the scoring with a deflected shot, after some scrappy play in the box.
Joe Thomson made it two with a beautiful finish into the top left corner after beating a tackle.

Proceedings started with Derry having plenty of the ball, but failing to break open the stubborn Blues backline. Long balls weren’t quite connecting with Junior and James Akintunde up front.

Some sparks in the final third did come from Danny Lafferty though, as he blitzed forward down the left. A pulled-back cross found the young McLaughlin, but his clean hit couldn’t find the net.

McLaughlin continued to impress. Having only signed a professional contract this week, some may have expected him to be nervous. This was anything but the case, the midfielder’s Late runs were tearing holes in the visitor’s defence.

Finally, one such run bore fruit just before the break. A ball into the area pinged about off knees and bodies, but McLaughlin battled and slid to strike the ball, it deflected in past a helpless Brian Murphy.

Derry gave the Brandywell faithful something else to cheer about just after half time. Akintunde worked hard to keep hold of the ball before feeding Joe Thomson.

The Scot just about squeezed the ball from under his feet, inching past a tackle, before taking aim with his left foot. The result was a very classy finish, that the ‘keeper once again had no chance to save.

Marc Bircham’s side tried to assert themselves with twenty minutes to go, hitting the post on one occasion, but it was easy to see that Derry were the better team.

New Candystripes signing Jamie McGonigle looked dangerous in a half an hour cameo, with a powerful shot saved, and a scuffed finish at the back post just before time.

City can be pleased with the performance, they’ve picked up a valuable home win, and moved themselves even further from the drop zone. However, for Bircham and the Blues, there isn’t going to be a sudden upturn in fortunes, it’s going to take hard work to escape their predicament.