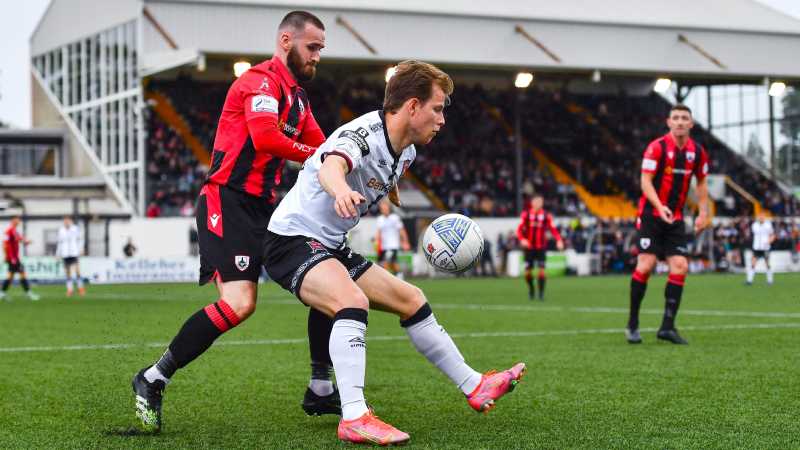 It was a night of firsts for some, but Dundalk had to wait until they could beat Longford Town 4-0 in a decisive second half at Oriel Park.

While neither team was able to break through in the first half, Stephen O'Donnell's team's win was secured with three goals in the space of seven minutes, followed by a second goal for Greg Sloggett. In fact, this was Sloggett's first goals of the year, and Pat Hoban's ninth goal of the year as well as Joe Adam's opening up his Dundalk account.

Greg Sloggett had the first opportunity to score for the home side after Stephen Brady used some deft trickery to feed him the ball, but his attempt from the edge of the box missed the target. With a half volley from the edge of the box, Patrick Hoban attempted to increase his season total of eight goals, but his effort dipped at the wrong moment and went beyond Luke Dennison's bar.

The home team's best opportunity of the half came when Hoban held the ball up to release newly signed loanee Runar Hauge, whose cross found the advancing Keith Ward, but his attempt just missed the target. Jordan Adeyemo for the Midlanders has his side's best chance as he surged through the Dundalk defence and lobbed the ball over the advancing Nathan Sheppard, but it was in vain because he had strayed offside during the buildup.

In the second half, Dundalk made substitutions, bringing in Ryan O'Kane for Runar Hauge and Joe Adams for Keith Ward. These adjustments had the desired effect, as Dundalk scored three goals in the span of eight minutes to secure the victory. After a superb assist from Bradley, Greg Sloggett scored the first goal from an initial effort from Joe Adams,  Sloggett was there to put the ball past Dennison after it was saved from Adams.

Two minutes later, the Lilywhites scored their second goal when Hoban laid the ball off to Macari, who then crossed the ball for the Dundalk striker to pounce. Joe Adams scored for Dundalk for the first time by latching onto a pass at the edge of the box and firing a low shot past the goalkeeper. Greg Sloggett scored the fourth goal for Dundalk by tapping in a Ryan O'Kane pass. O'Kane was brilliant during the buildup, breaking into the area and providing the Dundalk number 10 the inch-perfect assist.

Ryan O'Kane's shot was brilliantly stopped by Dennison, and John Martin appeared to have added a fifth goal, but his tap-in was disallowed because he was offside.

For the away side, Darragh Clarke received an excellent pass from Karl Chambers, and he attempted to score a consolation goal, but he overplayed the ball, and Sheppard easily gathered it.

In what could be considered a tale of two halves for the men from Oriel, Dundalk will be happy to advance to the next round.