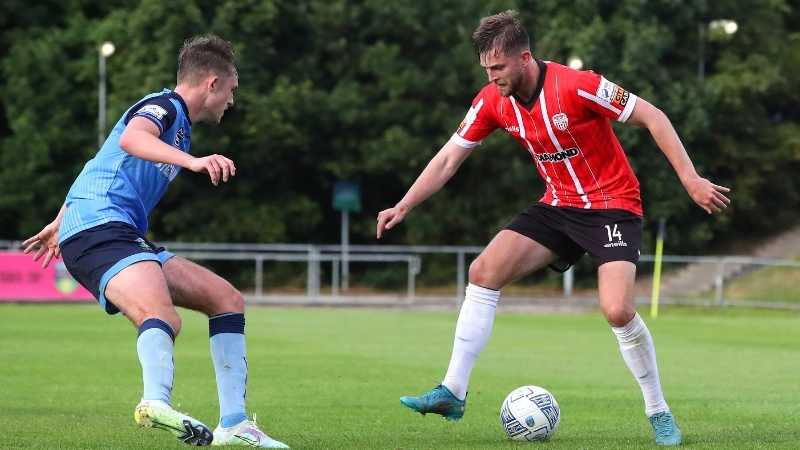 A Will Patching penalty was the difference as Derry City ended their recent winless slump with a keenly contested 1-0 win at bottom side UCD.

Sean Brennan came close on numerous occasions yet when Michael Gallagher shoved Jamie McGonigle, Patching kept his cool and slotted his penalty into Kain Moore’s net for a much-needed three points for the Candystripes.

The match pinned a UCD side with one win to their name all season against a Derry City team seeking to end a seven-game winless streak.

The first half featured lots of effort from both sides but a lack of clearcut chances, young Caoimhin Porter again looking lively for the visitors.

Ciaran Coll’s header wide from a corner which went wide was their best opening. Brennan then badly miscued a bobbling ball after Dylan Duffy kept it in brilliantly, the midfielder shooting high.

Tellingly, the league’s top scorer, Jamie McGonigle had been kept quiet by UCD but only a last-ditch Dara Keane block prevented Brandon Kavanagh opening the scoring.

Moments later, Michael Gallagher panicked and shoved a sprawling McGonigle to ground, and a penalty was awarded to Derry. Will Patching stepped up and converted confidently, the spot kick his ninth goal of the season.

Despite not creating much, Ruaidhri Higgin’s men were more than content to sit back and counterattack rapidly, Kavanagh and McGonigle’s pace causing problems for the home side.

Although UCD made a triple substitution, they couldn’t create any further chances as Derry saw the game out comfortably enough. A deflected shot from Adam Verdon that rustled Maher’s side netting was the closest they came.

And so UCD remain rooted to the foot of the table with Finn Harp’s remarkable comeback unlikely to boost their morale. They travel to Dundalk next. Derry meanwhile will want to build on this as they face Bohemians next weekend, having finally rediscovered that winning feeling.