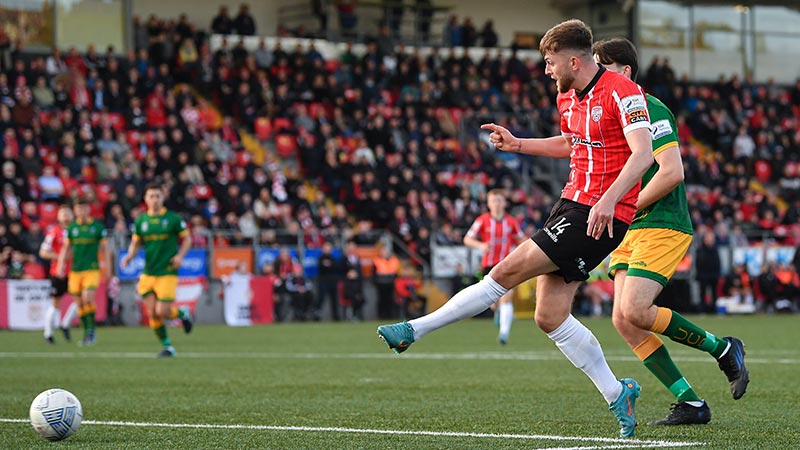 Derry City maintained their position at the summit of the table with a dominating win over UCD tonight.

A Jamie McGonigle hat-trick supplemented by goals from Will Patching, Cameron McJennett, Cameron Dummigan and Robert Boyce more than did the job. Alex Nolan would add a consolation for the visitors.

It did not take long for the candystripes to get going in this one. Matty Smith and Patrick McEleney had warning shots in the first ten but to no avail.

In the 13th minute the onslaught started. Shane McEleney played a long diagonal ball forward for Will Patching, who chested it down and slotted it by Lorcan Healy for the opener.

It was relentless from this point on. In the 21st minute, Cameron Dummigan played a similar pass to that of McEleney’s eight minutes prior and found Jamie McGonigle in behind the UCD defence, who fulfilled his duty and made it two.

60 seconds later give or take and it was 3-0. Brian Maher played a long kickout and Luke Boore dealt with it poorly, allowing McGonigle to latch onto the ball and slot it by Healy again for his second in as many minutes.

The fourth came ten minutes later when Matty Smith got the ball in the left hand corner and bet his man, floating in a cross that Cameron McJannett met all the way up from full back to head in.

The final of the first half was scored on the brink of half time when Dummigan received the ball about 40 yards out in acres of space. He tried speculative effort after realising no pass was on and his shot went in to much surprise. It’s fair to say Healy should have dealt with it better.

Early on in the second Derry showed no intentions of calming it down through efforts from Patching and McGonigle.

It would be Ronan Boyce who got the sixth from a Patching cross following a one-two with Smith from a corner, rising up to head home.

McGonigle got his hat-trick on the hour mark after he withheld pressure following a lovely through ball from Patrick McEleney, making it seven for the hosts.

Alex Nolan would smash home the second ball from a corner in the 63rd minute to add a consolation. From this point on, chances were few and far between. Derry will be happy that their position as leaders remains intact.