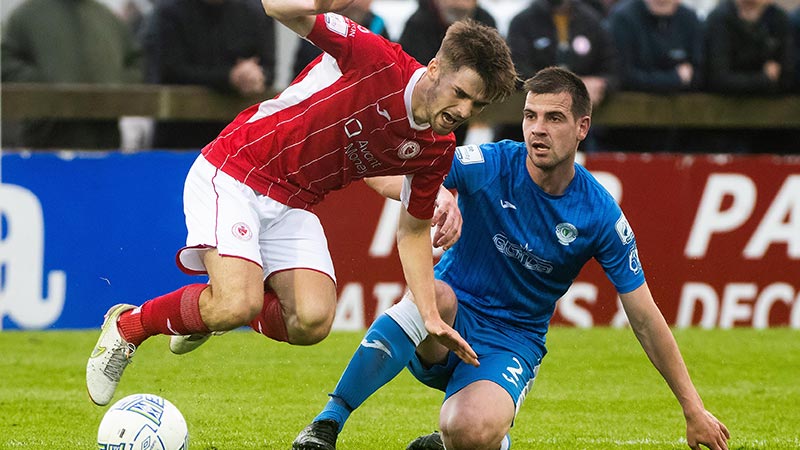 John Russell’s first official game as manager of Sligo Rovers ended in a comfortable 3-0 home win over strugglers Finn Harps at the Showgrounds.

A blistering start saw quickfire goals from Aidan Keena and Karl O’Sullivan inside the opening 10 minutes.

Despite improving, Harps were unable to score, and Keena scored his second five minutes from time for Rovers to leapfrog Bohemians back into fifth place.

Sligo started like a side keen to impress their new manager, ferociously pressing Harps back from the get-go. And neat interplay eventually led to Karl O’Sullivan slipping in Lewis Banks whose dangerous cross was only parried by Alan McGinley as far as the lurking Aidan Keena who tucked home.

Just moments later and it was 2-0. Shane Blaney carried the ball out from defence and helped by a breezy wind, his long ball carried all the way up the field. McGinley hared out but misjudged its flight allowing O’Sullivan to nip in, round McGinley and gleefully stroke home.

Finn Harps, to their credit, came back into it and Eric McWoods forced a one-handed stop from home keeper Ed McGinty. And visiting midfielder Ryan Rainey could count himself fortunate to not be sent off after two rash challenges in quick succession only yielded a single booking.

New signing, Dylan Duncan made his Harps debut, introduced at half time by Ollie Horgan. Although he was booked for diving, Duncan’s crisp passing and slick exchanges with McWoods helped Harps dominate the territory. Imperatively, however they were unable to threaten McGinty’s goal.

Indeed, it was Keena who came closest to scoring next, but he fired high after being played in on the counterattack. Yet, after persistent work from O’Sullivan, Keena soon had his second heading home from close range to seal the points.

Next up for Harps is a home game with St Patrick’s Athletic, something they could do with points from. Sligo travel to Drogheda, undoubtedly buoyed by a clinical performance here and three points to boot.