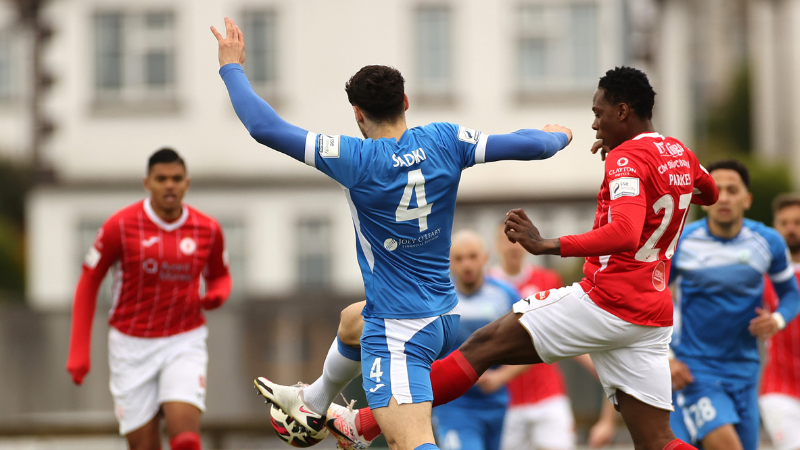 Sligo Rovers have suffered a shock defeat at the hands of local rivals Finn Harps at the Showgrounds, putting a massive dent in their Premier Division title hopes.

A win would have seen them level with second placed St Pat’s with a game in hand, but the 1-0 loss tonight drifts them further wayward from the top duo.

Kosovar Sadiki’s header was the only strike of the game, sending Sligo to despair and desperation but Harps home with all three points.

Johnny Kenny’s first half endeavour, that was saved off the line by Ethan Boyle and Mark McGinley; was the closest either of the sides came to crossing the goal threshold in the first half, but it wasn’t for the want of trying.

Mostly comprising of set pieces from both camps, the intensity was very high and the footballing quality colossal.

Just one minute after the interval Sadiki broke the deadlock when he met an exceptional Karl O’Sullivan free kick to power the ball into the back of the net.

Game management ensued as the away side looked to retain their lead in the volatile rumbling of The Showgrounds under lights.

The wet and windy conditions not aiding the case, a bombardment of cards turned out in combination with the rising tensions. With seven players booked in total upon the final whistle, one of which included a second yellow and subsequent red sending Mark Coyle to the stands.

Harps were taxed six minutes added time for their ploys, and it came down to the wire as to whether a late equaliser was to come from The Bit O’Red.

Had it not been for a few last ditch saves by Mark McGinley it may well have come, but the keeper and his two centre backs (Sadiki and Dave Webster) are to be accoladed with the triumph as their display as a trio is what won it for the third from bottom team in the end.

Sligo now go back to the drawing board, having been knocked out of the FAI Cup, Europa Conference and league running, all in the space of a month.