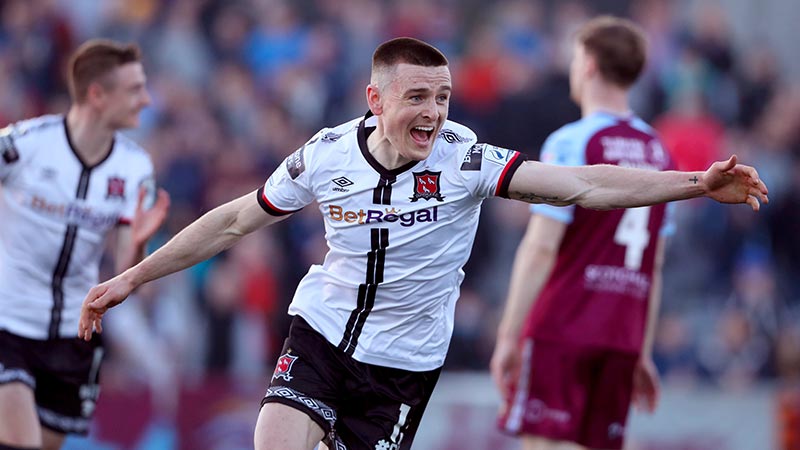 A brace of goals from Darragh Leahy and the 130th goal for Patrick Hoban gave Dundalk a commanding 4-1 win over rivals and neighbours Drogheda United in the Louth Derby.

The left-back scored his first two goals for the club on each side of the half before Hoban converted a second-half penalty to seal the tie.

Ryan Brennan did pull one back late in the game for Drogheda however Dundalk were not finished scoring as John Martin added another strike as the bragging rights are now in the Lilywhites favour for a few weeks at least.

The first corner fell to the home side, with Patrick Hoban heading goalward, but it took a deflection, and Sam Long pulled off a good save. Dane Massey nearly met a free-kick thrown into the Lilywhite area at the back post, but he was unable to return to torment his old team with a goal.

Dundalk then took the game to the Drogs, with Joe Adams delivering a fantastic cross to Hoban, whose header just went over the bar. With their next effort, Keith Ward delivered a magnificent free-kick that rebounded off the crossbar, and Darragh Leahy was on hand to head it home.

Keith Ward nearly added his name to the score sheet after all his hard work, beating the last defender and breaking free to be one on one with the keeper, but instead of going for power, he opted for place and his effort went wide.

After an initial build-up from Keith Ward and Patrick Hoban, Joe Adams crossed it into the area, and Darragh Leahy, who made a late run, was on hand to tap it home for the Lilywhites.

Keith Cowan handled the ball and a penalty was awarded to the home side. Hoban came forward to convert the penalty kick for his 130th goal in a Dundalk FC shirt. Ryan Brennan breached the North Louth defensive line and curled the ball past Sheppard neatly, giving Drogheda a consolation strike.

Dundalk would reclaim the three-goal lead in additional time, as John Martin made it two goals in two games with a clinical finish from Joe Adams' ball just at the full-time whistle.