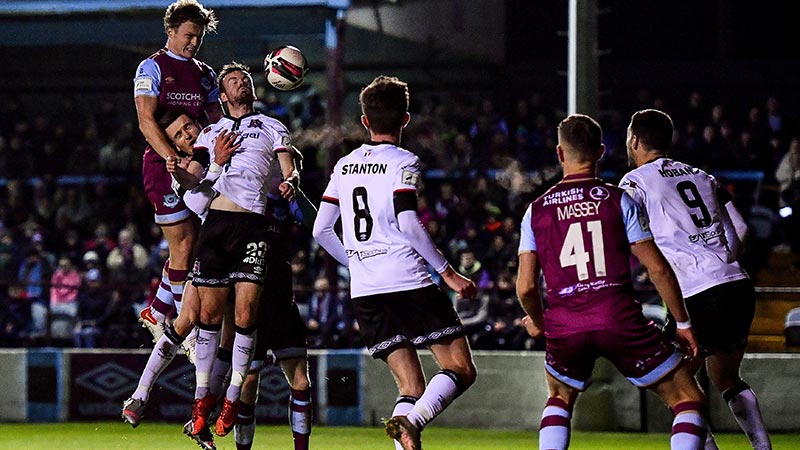 It may not have been the prettiest of goals in what was a tense night at Head in the Game Park. It was going to take something special to break the deadlock and the men from Oriel finally picked the lock with three minutes left on the clock to break Drogheda's hearts.

The first half began as expected with a game of such magnitude, while the pressing from both sides was intense neither team created an early chance of note.

Dundalk carved out a series of chances as the contest began to open up more with Hoban peeling off from Massey's attention from a corner but his header at the back post went over the bar. Daniel Kelly's cross into the United area took a deflection and fell to the non-intended target of Sean Murray.  He was smart with his attack forcing a fine save from David Odumosu.

Both clubs had goals disallowed as the main talking point of the first half came into context. The brace of goals was ruled out much to the ire of both sets of supporters. Ronan Murray's corner saw Dan O'Reilly convert the set-piece but his attempt was chalked off while Andy Boyle down the other end was adjudged to have fouled en-route to heading the ball his goal home.

After the interval, Drogs enjoyed an early spell of posession and chances as Gary Deegan's header, the best of early threats on goal saw his effort go away from its intended target. That threat seemed to spring Dundalk into action as they took control of the match.

They will wonder that despite the ample chances created they failed to convert them. Will Patching had the pick of the bunch as his long-range effort was tipped onto the bar by Odumosu as the ball fell safely back into his hands. Darragh Leahy's low ball found its way to Murray in the area but his curling went wide at the post.

Drogheda continued to counterattack at every turn with Dane Massey having an opportunity to punish his former club as he met a corner with his head at the near post but his effort cleared Peter Cherrie's goal. Gary Deegan also set his sights on Cherrie's net but his free-kick went over the bar.

It was Dundalk who would finally break the resistance of the Drogheda defence with just three minutes to go. A free-kick from Michael Duffy went deep into the United goalmouth as the initial effort was blocked but Cleary was on hand to steer the ball home.

That goal sums up the contest, an excellent performance from both sides undone in the blink of an eye.