Martin header the difference for Dundalk 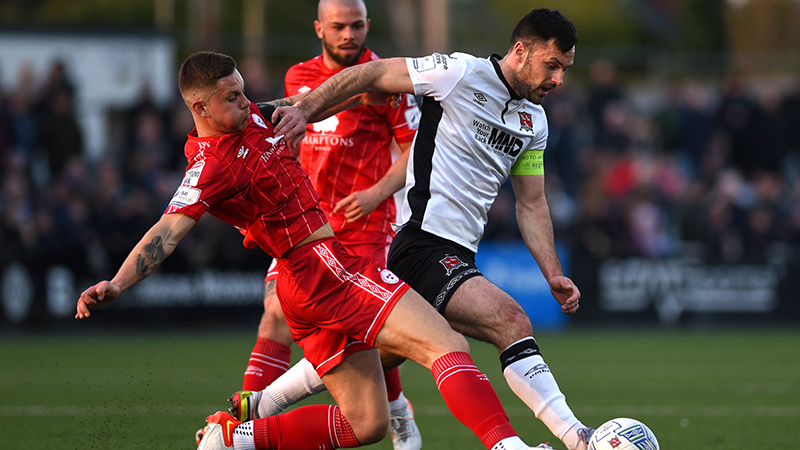 A game of high drama that had cards galore, three sendings off and a penalty but a John Martin stunning header with just five minutes to go sealed the three points for Dundalk in a game at times reached boiling point.

Dundalk took the lead with a Daniel Kelly strike with Shane Farrell levelling for Shelbourne. Dundalk coach Stephen O’Donnell summoned his bench and it was Martin who applied the fantastic touch to seal the tie for the Lilywhites.

In the final seconds of a first half that had produced little in the way of activity, the game would spring into action. Paul Doyle had the first shot on goal after Stephen Bradley's initial cross was met by the Dundalk midfielder, but his effort was blocked.

Bradley then had a glimpse on Brendan Clarke's goal with a half-volley effort that could have caught the Reds keeper off guard, but he did well to save it. Conor Kane's corner kick took a deflection and soared far over the bar for the visitors.

Darragh Leahy was on hand to prevent a certain goal when he denied Moylan after he appeared to be on his way to scoring from the left side of the area. On the stroke of half-time, Shane Griffin was sent off for a second yellow card, which infuriated Damien Duff on the touchline, and his protests were too much for Paul McLaughlin, who also handed him his marching orders. The former Irish international saw red for the first time in his career.

The first half was quite quiet, but it paled in comparison to the second. Patrick Hoban tested Brendan Clarke early in the half as Dundalk looked to take the game to the visitors. Shelbourne's had penalty appeal was turned down, and Dundalk took the lead shortly thereafter. After some excellent play by Hoban to spot Leahy over his shoulder, the full back's cross was brilliant, falling to Daniel Kelly at the back post, who tapped home for the third consecutive home match.

After a collision between Mark Connolly and Conor Kane, Shelbourne was awarded a penalty, as Paul McLaughlin pointed to the spot. Shane Farrell converted the penalty as the game appeared to be heading for a draw, but O'Donnell summoned the bench to inject some life into the proceedings. It was a huge success.

With what was his first touch of the ball, John Martin received a superb cross from the right and his header flew past Brendan Clarke to the top left-hand corner to seal the tie.