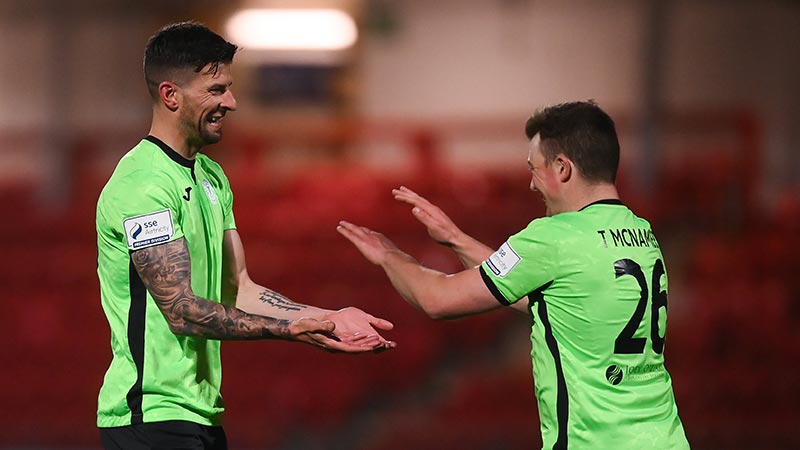 Two goals in quick succession meant that Finn Harps came back after conceding early to Waterford at the Regional Sports Centre tonight.

A penalty from Barry McNamee in the 75th minute drew the away side level. Substitute Adam Foley put his side ahead less than a minute later and secured the three points for Ollie Horgan’s men.

Waterford got off to a great start, taking the lead through left-back Jamie Mascoll. A great pass saw Mascoll get in behind the Waterford defence and place the ball to the right of Harps ‘keeper, Mark McGinley.

It was clear as soon as they went behind that the visitors were intent on getting back into the game. Their pressing of the Waterford team was very aggressive and maybe a bit too much at times as they gave away a number of fouls in the opening 30 minutes.

The home side dominated possession for the majority of the first half but Finn Harps managed to take control after around forty minutes and create a number of chances to draw level.

Harps striker Babatunde Owolabi had a number of chances that he could not get past Waterford ‘keeper Brian Murphy, who made some exceptional saves to deny the striker.

Going into half time, the away side looked the most likely to score next and this followed on into the second period of the game.

Sean Boyd had an effort spectacularly saved by Murphy in the 61st minute and Ethan Boyle came close with a header at the back post that went over the bar.

Waterford finally collapsed under the pressure when they gave away a penalty in the 74th minute that was dispatched by McNamee. A second was added by Foley and that secured the win for the Ballybofey club.

Marc Bircham will be disappointed that his side could not hold on but he will be happy with the spirited performance that his side put in defensively.

For Finn Harps, Ollie Horgan will undoubtedly be delighted that his side could come back after conceding so early. He will be expecting his side to build on this victory.