Byrne delivers on the double for Athlone 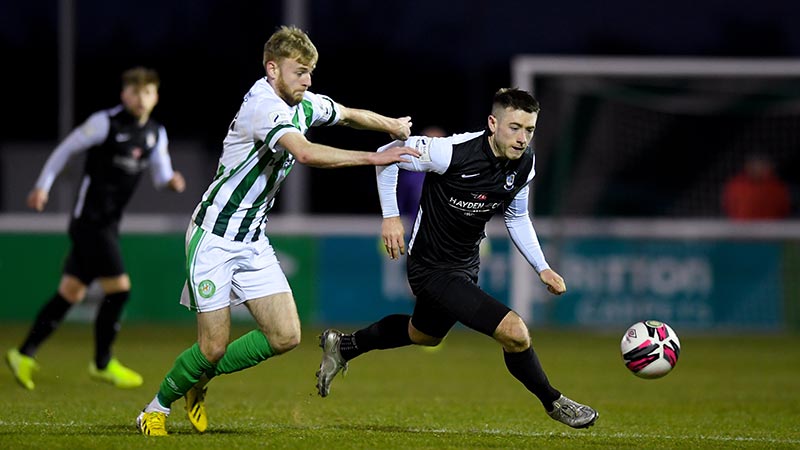 A four-minute goal brace from Kurtis Byrne was enough to propel Athlone Town to a 2-1 victory over Bray Wanderers at the Carlisle Grounds in the SSE Airtricity First Division tonight.

The visitors looked solid throughout with their two goals coming in the 10th and 14th minutes after Bray had opening the scoring through Dylan Barnett’s 25 yard volley into the top corner of Michaél Schlingerman’s net.

Bray attempted a comeback but were eventually undone by Ryan Graydon being sent off in the 88th minute for an off the ball incident.

The opening minutes of the game were action packed, with both teams pressing the other aggressively. Athlone found early success down the right with Adam Wixted’s pace and trickery creating room for him to whip in crosses.

Despite this it was Bray who struck first in the seventh minute, with some smart play down the right wing leading to a cross that Athlone tentatively cleared into the path of left back Dylan Barnett.

He promptly smashed the ball into the top corner of Michaél Schlingerman’s net, but Bray’s lead was short lived. Three minutes later the Town were able to turn their pressure into goals.

It was Wixted that once again created the space on the right wing, before sliding the ball down the line to the overlapping Aiden Friel. Friel’s cross was perfectly placed between the keeper and centre back allowing Kurtis Byrne to swoop in and poke the ball into the net.

Not content with resting on their laurels Athlone came right back to notch another. Wixted perfectly corralled a cross-field pass, before laying it off to the oncoming Byrne who promptly smacked a beautiful shot into the bottom corner of the net from 20 yards out.

From there the game seemed to settle down with Athlone and Bray both content to settle in and close out the half that way.

In the second half, the slower pace seemed to continue with Athlone happy to keep the ball and pass around Bray, while the Seagulls wanted to do nothing but to go the direct route whenever they got the chance.

It wasn’t until the 70th minute that Wanderers finally woke up, with Ryan Graydon causing numerous problems for the Westmeath outfits defence. This led to multiple good chances with the pick of them being Luka Lovic’s 78th minute miss; where Graydon danced down the wing before sliding the ball across the six-yard box into the path of Lovic.

Lovic completely whiffed on the chance sending the ball over the bar from close range. Bray continued their assault up until the 87th minute when a Dylan Hand foul on Bray’s Connor Clifford sparked a series of brawls which ended up with Graydon being sent off.

After this Bray were unable to rally with Byrne almost hitting Bray on the counter to get the hat-trick as Athlone closed out the game to stay top of the First Division.