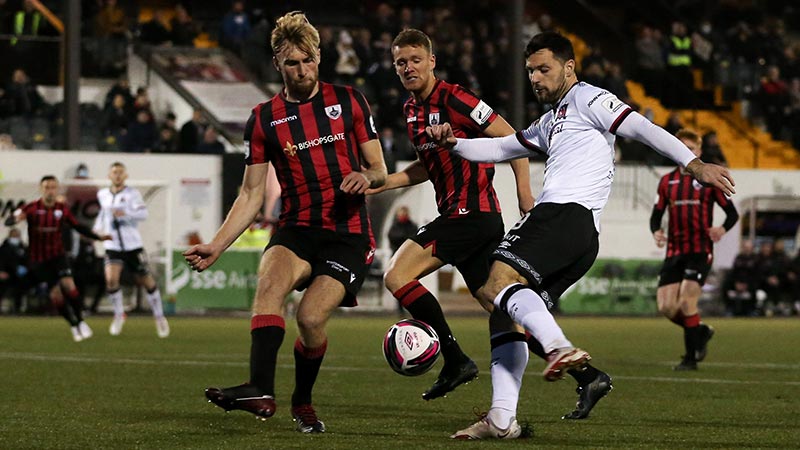 Dundalk's quest for a top-four finish took a significant step closer as second-half goals from Patrick Hoban and Sean Murray gave them a comfortable 2-0 victory over Longford Town.

This win means they will go into the final day of the season with the coveted fourth spot in the league still in their sights.

As things stand Derry, Bohemians and Dundalk are all on 48 points in what will be a dramatic end to this season. There is so much that has yet to be decided in this box office season.

Longford's defensive set-up meant that for a long time they frustrated the hosts. It was only a matter of when as opposed to if when the men from Oriel would score.

The opening half was a rather irritating affair as the Lilywhites, despite having plenty of possession and creating several chances; didn't make a breakthrough.

The visitors nearly caused a shock as Rob Manley’s header was cleared off the line from a corner in the early period of the game.

From then on it was one-way traffic towards the Carrick Road end.

Dundalk began to attack in waves against a resolute Longford defence with Patrick Hoban getting the ball on the edge of the area and hitting an inch-perfect shot that forced Steacy down to save. The home side continued to press with Michael Duffy balancing the ball on his head before taking it down to strike a low effort that Steacy could only parry.

While the chances went begging in the first, they were converted with a flourish in the second.

After the interval, Dundalk continued their surmounting pressure on The Town and it paid off almost immediately. Michael Duffy whipped an early cross into the box and Hoban rose highest to nod the ball past Lee Steacy and got the home fans on their feet at last.

They didn't have to wait long to be up again as Sean Murray added a second moments later. In what was an excellent attack the ball found its way to Will Patching as he slipped it to Murray who rifled his effort off the post to put the game in full Oriel control.

Longford had Lee Steacy to thank to keep the score-line to just two as pulled off several fine saves to deny Duffy and Andy Boyle but in the end, Vinny Perth's men secured their first win of the season over their Midland rivals.

The same side that results were left to be rued earlier on this year.