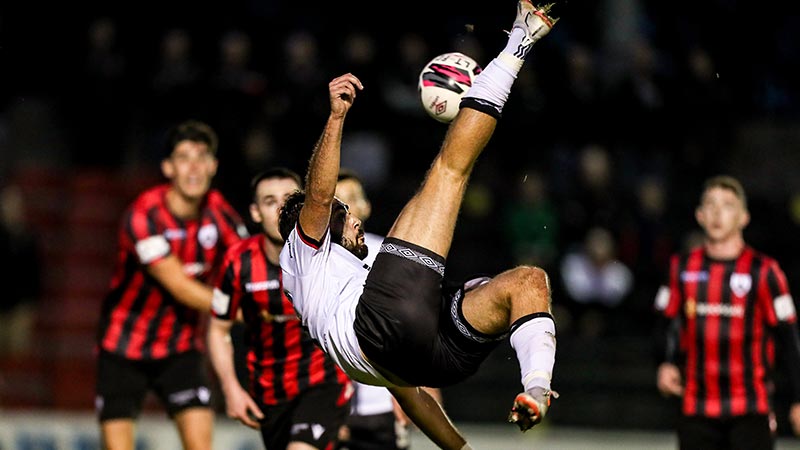 Longford Town ended their five-game losing streak with a resolute and hard-working performance in this bottom of the table Premier Division clash at Bishopsgate.

Aaron O’Driscoll’s solitary goal right on the stroke of half-time was what made the difference in a game they had to dig deep after Daire Doyle’s side were reduced to nine men in the second half.

Despite an onslaught of opportunities from the away side Dundalk failed to convert and ‘The Town’ held out for a much-needed victory as they looked to get vital points for their quest for safety.

Dundalk started the game with intent and was dominant in possession and delivered a plethora of chances that they failed to convert. The first of those came as a Raivis Jurkovskis cross was met by Sam Stanton at the back post but he just headed it wide.

The chances kept coming for the Lilywhites as a curling cross from Cameron Dummingan was met by Patrick Hoban but his header went wide of the post. The Dundalk number nine would have another sight on goal not long after as Sam Stanton bore down the left and his cross was met by Hoban whose effort from a tight angle was saved by Steacy.

Despite the abundance of chances and high press from the visitors, it was Longford who was draw first blood as the home side took the lead right on half time. Dylan Grimes' free-kick was flicked on by Aaron O'Driscoll whose header somehow squirmed under the dive of Dundalk debutant Cameron Yates. A disaster for the away side who were left to rue the missed chances of the first half.

Dundalk continued the pressure early in the second half as Sami Ben Amar's cross was sent over the bar by Joe Manley, the resulting corner saw Daniel Cleary’s header towards goal caught by Steacy on the second attempt. Longford was reduced to ten minutes into the second half as Aaron Robinson was given his marching orders following two yellow cards in seven minutes, the second yellow was given following a challenge on Sam Stanton that incensed the home dugout.

Using their numerical advantage Dundalk put Longford’s defence to the test as Andy Boyle from the free-kick struck the woodwork. Dundalk continued to press but to no avail as the home side defended deep and well clearing everything Dundalk threw at them.

Vinny Perth emptied the bench in desperate search of an equaliser that just simply never came. Longford was made to work overtime as they were reduced to nine men as Rob Manley was sent off for a challenge on Ryan O’Kane, despite the numerical difference, Dundalk continued to rue chances and failed to make it count. Longford however showed composure and character despite the consistent tidal wave of Lilywhites attacks.

Han Jeong Woo was sent off for the visitors as Longford took the vital three points and a much-needed win for the Midlanders.