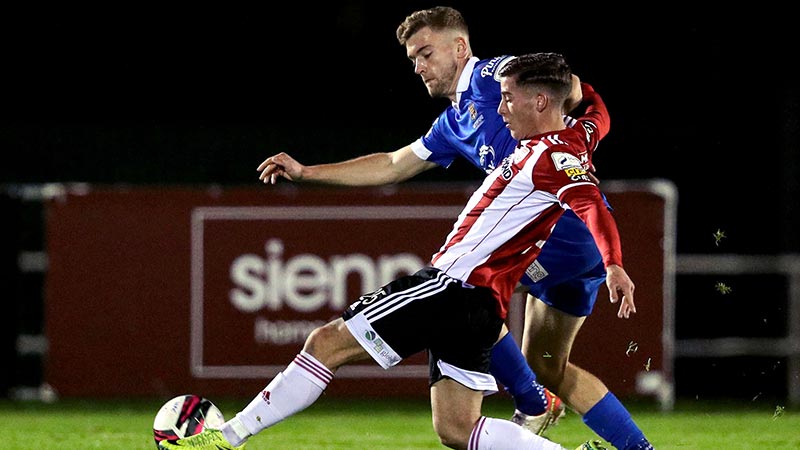 It was a fast start for the hosts, as a Jack Stafford cross was stabbed home by Junior Quitirna after just three minutes.
After some frustrating play, the Candystripes equalised through Danny Lafferty’s close range effort.

It wasn't long before the Blues were back in front, Greg Halford finding himself free at the back post from a free-kick to make it 2-1 before half-time.

However, Derry would grab a last-gasp point, as McJannett slammed into the net after a scramble in the box.

There was no time for the visitors to settle into the game, as Waterford started quickly. The trio of Phoenix Patterson, Stafford and Quitirna linked up to supply the latter with a golden opportunity. The Blues number eleven nipped just ahead of his man to aim a strike into the back of the Derry net.

A lull in the play soon followed, with stoppages and a generally pedestrian play style from the Candystripes lowering the tempo greatly. In spite of this, some magic near the corner flag from James Akintunde created a crossing opportunity. The ball was met by Lafferty who squeezed the ball just past Paul Martin.

With momentum going Ruaidhri Higgins’ team’s way, Halford scored against the run of play. A Patterson free-kick was nodded across the box to the towering centre-half, who couldn’t miss. The teams went in at half time with one much happier than the other.

The second-half was disjointed and chances were hard to come by for either side. Patterson left the ‘keeper flat-footed from a free-kick as his shot fizzed past the left upright.

Just when it seemed the game had wound down to its conclusion, the first Candystripes corner of the match caused chaos in the Waterford box. McJannett remained composed and put his foot through the ball to equal the scores.

For Waterford and Marc Bircham, this will feel like a loss, so close to a vital three points. City can take heart from their fight, but a point doesn’t really help in their European race.