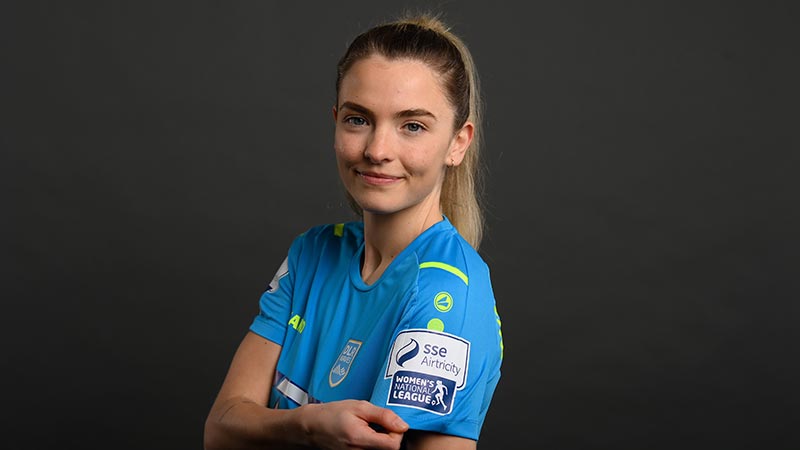 Goals from debutantes Lynn Craven and Joy Ralph helped DLR Waves to a 5-0 win over Treaty United this afternoon.

A really composed performance by the Dublin outfit, as they bid for title success.

Craven had them ahead at the break before Kerri Letmon added a second just after the restart, Avril Brierley had them 3-0 ahead after the hour mark before Ralph wrapped the game up in the 81st minute.

A tough loss for the visitors as they failed to threaten the Waves defence, a few half chances all afternoon as the hosts have made a statement of intent to their counterparts.

Waves had the first attempt at goal, Fiona Donnelly striking the ball cleanly first time from 25 yards out but Michaela Mitchell in the Treaty goal did well to get down and tip it behind for a corner kick.

The hosts continued to search for the opening goal, a lovely through ball from Kerri Letmon on the turn played in Donnelly running from deep, Emma Deegan however was in place to clear the danger for the Limerick outfit.

Another half-chance for Waves came on the 14 minute mark as Jess Gleeson's header was controlled by Sophie Watters and her shot on the turn was easily saved by Mitchell. They should have gone ahead a minute later with an exchange of passes between Shauna Carroll and Rachel Doyle, down the right before a great ball was sent to the back post but Letmon couldn't turn it home.

It took until the 33rd minute for the first effort from Treaty at goal, Emma Costelloe tried her luck from range and the effort was not far off the target, Treaty playing the majority of the opening half on the back foot, as they had very few attempts at goal.

Waves took the lead after 41 minutes, an inswinging corner by Carroll was only palmed away by Mitchell in the Treaty goal, the visitors failed to clear and Lynn Craven on her debut side footed home to give them a 1-0 lead.

Watters came close to getting a debut goal after 43 minutes, she was played through on goal and looked to pick her spot in the corner of the net, but Mitchell made a great save to turn it behind, as Waves led 1-0 at the interval.

Just two minutes after the restart Kerri Letmon steered home from close range to give Waves a two-goal advantage, another Carroll corner where a defender managed to get a touch before Letton turned it home.

Minutes later the hosts were appealing for a penalty but the referee waved away the protests, as Letmon looked to have been brought down inside the area, it remained one way traffic as Treaty could not get going in the half.

Two became three after the hour mark, Avril Brierley heading home goal number three, an immediate impact off the bench from Sarah McKevitt, who marked her debut with an assist as she crossed for Brierley to nod home from close range.

Waves kept on the front foot looking for a fourth goal, a great effort from McKevitt off the right wing had Mitchell tipping the ball off the post and wide, the pressure remaining at the Treaty half with Joy Ralph and Letmon both winning the ball high up and Letmon's shot was well blocked by Jesse Mendez.

Watters had another half-chance at goal, but it was U17 star Ralph that managed to make it 4-0 in the final ten minutes, a well struck half-volley from another McKevitts cross, a dream start in her senior debut for the Dubliners.

Ralph had another effort five minutes from time, firing a shot from 20 yards out which flew past the Treaty goal, but she would be rewarded in injury time as she would volley home another effort from close range, to finish off a five star opening day performance by DLR Waves.