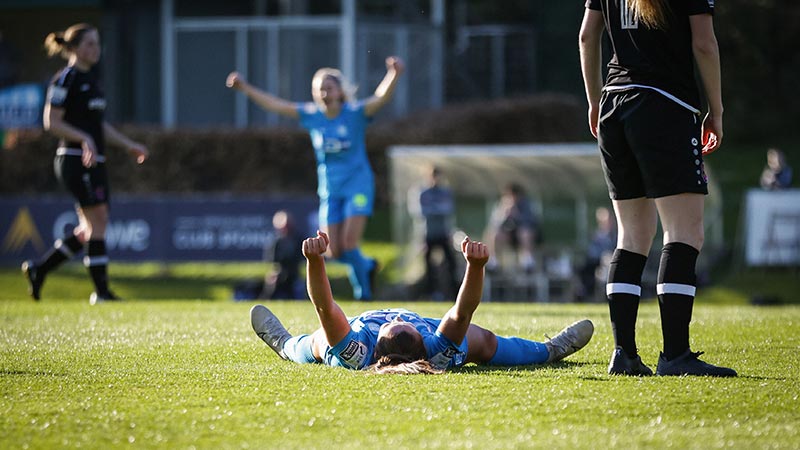 Traffic may have delayed the kick off time in this one between DLR Waves and Treaty United but there was no sign of deferred performances at the UCD Bowl.

Goals from captain Catherine Cronin, a Carla McManus double; a Jesse Mendez OG; and an injury-time Jetta Berrill effort ensured the 5-2 victory was wrapped up for the Waves, with Jenna Slattery pulling two back for the visitors.

Under the cosh from the word go as a result of the delay, Treaty United started a bad day at the office by gifting the ball to Cronin who went on to smash the ball into the back of the net in the sixth minute.

McManus then went a stretch further with the scoreline when she bagged a goal at the end of her captain’s cross, and this was later added to with a Mendez OG to see Waves go into the interval with a healthy 3-0 to their name.

Slattery then hauled one back for the visitors in cracking fashion when she converted a screamer of an effort, but it was her second goal just after the hour mark that made things interesting.

3-2 with a half hour to go, Treaty through everything at the game but to no avail.

Substitute Berill trounced that idea out when she struck just minutes after she cane on to restore the two goal cushion.

To add insult to injury she secured the brace in the 91st minute that now means she has netted four times in as many games for The Blues.

The referee then signalled the final whistle to send the Limerick side on their long way home licking their wounds at their missed opportunity to collect vital points.

DLR will have been ecstatic with the result but more importantly the performance which although wavered around the 60th minute was dominant and professional for the majority of the fixture.