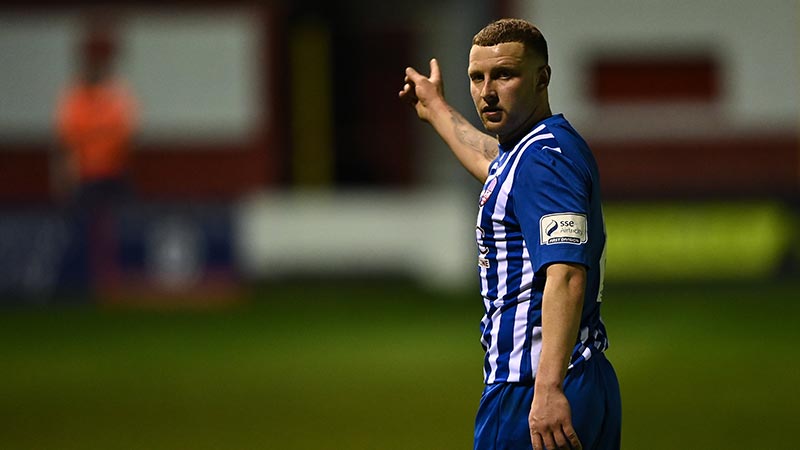 Treaty United go third in the First Division after a hard fought victory against struggling Wexford away at Ferrycarrig Park this evening.

100 home fans watched on, but this could not lead Wexford to find what would have perhaps been a deserved equaliser.

Treaty frustrated the Slaneysiders with organised defending, Marc Ludden’s experience in particular having an impact, and saw out the win to enter the top three.

It was the hosts however who took a shock lead after just a minute. Kyle Robinson took down a long ball nicely and finished well past Tadgh Ryan in the United goal. Ian Ryan’s team would continue to seek joy through this type of pass throughout the game. After a goal so early on it was hard not to feel like Wexford would be too inspired to finish empty-handed.

Yet they did and it can only be thought that the way Treaty responded so quickly was vital in stopping any of the home side’s momentum. In fact the visitors took only eight minutes to do so. Anthony O’Donnell headed home with power from a cross and Jimmy Corcoran couldn’t keep it out despite his best efforts.

The hosts resumed some of their positive play with the scores level. They mixed some tidy passing with some justified long balls. Conor Crowley was everywhere in the middle, and Robinson continued to huff and puff at the visitor’s back line.

However, when skipper Jack Lynch put Treaty ahead in the 18th minute against the run of play, it left them in the ideal position to play their pragmatic football. The same pragmatic football they have played all season under Tommy Barrett, which now leaves them third subsequently.

After they took the lead, the Limerick side instantly looked stronger and more solid. They even threatened to get a third goal towards the end of the first half, looking very strong in set plays. Wexford, despite having good spells, were left thankful to only be one down at the interval.

The hosts were the better side in the second 45 minutes, as they chased an equaliser, but couldn’t get it done in the final third.

Ian Ryan took some fair risks bringing on extra attackers. Success Edogun came on for James Carroll and almost equalised. Treaty however stayed organised and fouled professionally if necessary. United continue their fantastic first season as the new club in Limerick, while Wexford’s momentum has broken back down again on their own patch.