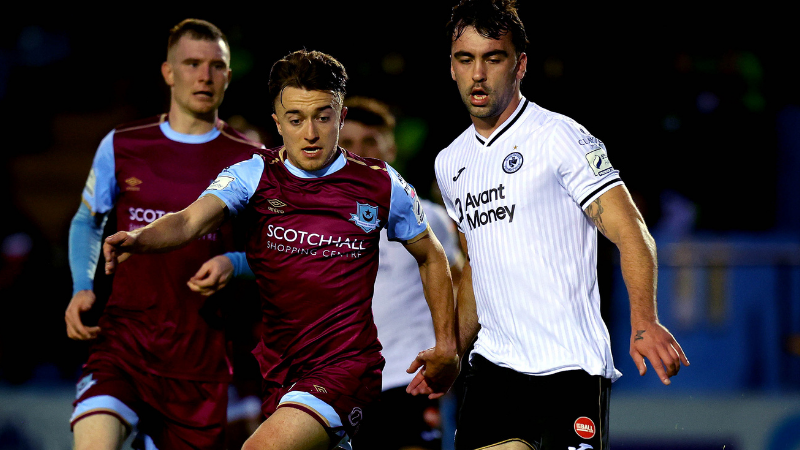 Sligo Rovers get their first win in six games as John Mahon’s 72nd minute header was enough to take all three points after a dominant display against Drogheda United at the Showgrounds.

Johnny Kenny’s goal in the dying moments killed off the tie, as the hosts ran out 2-0 winners.

The visitors started the stronger side, with chances for Mark Doyle in early stages. however the Bit O’Red gained some confidence and momentum when teenager Johnny Kenny caught Gary Deegan in possession just inside the Drogheda half on 13 minutes driving towards the Boynesiders goal with James Browne for company, the defender doing enough to force the youngsters strike just wide.

From then on, apart from the rare break forward, it was simply backs to the wall for the visitors as Rovers went in search of an opener, with a number of attempts driven high, wide or both from DeVries, Banks and McDonnell.

Drogheda looked nervous at the back with Kenny once again closing down this time forcing Goalkeeper David Odumosu to kick the ball out of play into safety.

The breakthrough almost came with five minutes left in the first half, however, three fine saves in the space of 30 seconds from Odumosu denied Banks, Wright and DeVries.

Drogheda weren't prepared to lay down and showed the North West outfit they needed to stay alert at the back and Doyle broke forward, his shot drifted just wide of Ed McGinty's post.

United started the second half with renewed optimism which was short lived as Sligo quality and work rate shone through hemming the visitors into their own half peppering Odumosus goal time and time again.

The breakthrough came almost came against the run of play as Gary Deegan, linked up with Killian Phillips to play in James Browne as Tim Clancys men broke forward, Brownes effort was tired and floated into McGintys arms.

Almost instantly Browne was called into action once again this time denying Kenny from opening the scoring for the home side.

Mahon broke the deadlock with 18 minutes of normal time remaining, as a run from deep met Adam McDonnell's in swinging corner, the academy graduate made no mistake in rattling the net.

Drogheda went in search of an equaliser bringing on Ronan Murray and Jake Hyland leaving themselves open at the back allowing Johnny Kenny to kill off the tie with two minutes remaining in normal time.